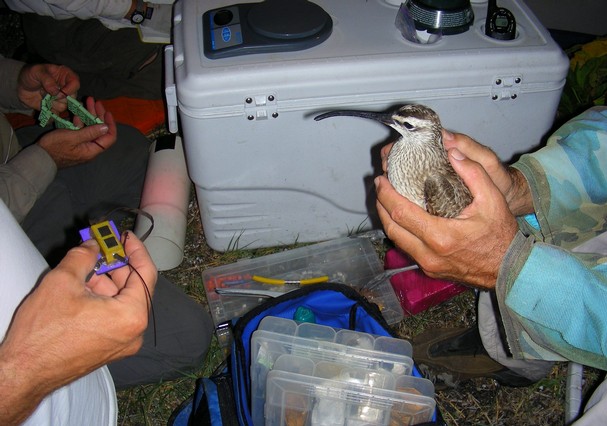 A biologist says a shorebird, tracked using a satellite transmitter, flew through Hurricane Irene and survived, Vince Jackson reports for The Independent Mail. The bird, a whimbrel, left Southhampton Island in northern Canada and reached the outer band of the huge storm as hurricane-force winds began pounding the Bahamas. The next day the whimbrel, nicknamed Chinquapin, migrated into the eye of the hurricane and landed on Eleuthera Island in the Bahamas. “Absolutely amazing,” said Clemson University emeritus professor Sid Gauthreaux, “Shorebirds continue to defy what we know about avian physiology.” Gauthreaux said most birds commonly seen in the Upstate would have a hard time surviving such a hurricane. “Common barn swallows are very good at navigating storms,” he said. “They seem to just shake the water off their body and continue flying. Other common birds often perish from broken bones and the weight of the water on their wings.” Scientists have long wondered how migrating birds survive hurricane-force winds. One of the major routes local bird species take is along the Atlantic Flyway, which extends from the Arctic down along the East Coast, and then across the Caribbean Sea. The birds move from breeding grounds in the north to warmer locations for winter. Since major storms often occur during the fall migration season, the mortality rate of birds caught in a hurricane is usually very high, according to the College of William and Mary Center for Conservation Biology in Williamsburg, Va. The latest update on Chinquapin came earlier this week from conservation biologist Tim Keyes of the Georgia Department of Natural Resources. “The bird is still in Eleuthera,” he said. “Tracking indicates the bird is feeding and building up its fat supply. We expect Chinquapin to continue migrating to Suriname, South America, where it wintered last year.” Chinquapin is a veteran of severe weather, having survived flying in Tropical Storm Colin in 2010. Long-term satellite tracking studies document previous encounters between whimbrels and major storm systems. In August a whimbrel navigated through Tropical Storm Gert in the North Atlantic. With headwinds beating against the pigeon-sized bird for 27 straight hours, it averaged 9 mph over the open Atlantic Ocean, according to information from the Georgia natural resources department. Once past the eye of the storm, the bird’s flight speed — pushed by the storm’s tail winds — increased to more than 90 mph. Chinquapin, about 4 years old now, was captured in 2010 southwest of Charleston on Little Egg Island Bar in Georgia. He was fitted by the Georgia natural resources department with a transmitter and released for his flight to Canada. Whimbrels can live for 10 or more years, and their population in eastern North America is around 40,000. “Chinquapin was about 3 years old at time of capture and release,” Keyes said. “It is hoped this bird will continue to supply satellite tracking data for some time, helping us better understand bird survival rates during storms.” For the original report go to http://www.independentmail.com/news/2011/sep/03/bird-survives-ravages-hurricane-irene/