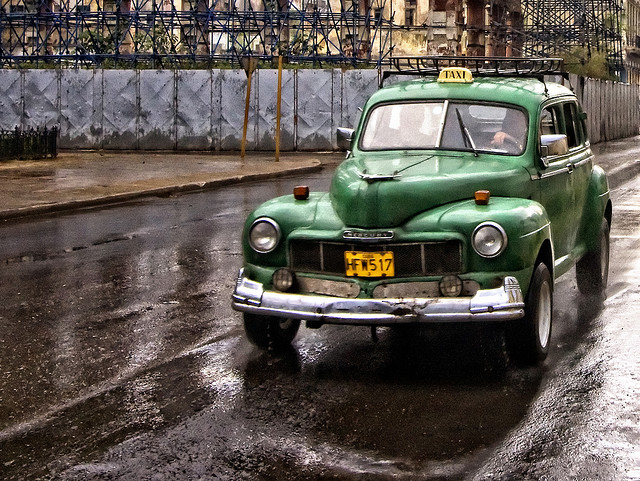 Chris Malazdrewicz takes a taxi ride through Havana in this report for The Montreal Gazette.

I wanted to explore Havana before these changes took full effect, so my wife and I booked a flight, and left a week before Christmas.

The imposing 16th-century fortress, El Castillo de Los Trey Reyes, guards the entrance to the harbour. The narrow streets etched into Old Havana wind back and forth, lined with exquisite colonial buildings once home to unimaginably wealthy Spanish aristocrats. The boulevards and the squares are haunted by the ghosts of conquistadors and slaves, sugar barons and revolutionaries. It’s easy to imagine Havana’s past glory and understand why it was called the “Paris of the Caribbean.”

Modern Havana is energy, colour, and music. The clean streets bustle as some two million Habaneros go about their business. Well dressed and groomed, they love their “bling.” They dart back and forth between work and shops and street food vendors, or rest in shaded parks beside statues of Cuban heroes. The pace is an odd mix of urban hustle and “island time.” It’s not hard to get used to.

The city is also worn and frayed. Decades of blockade-driven isolation have left Havana in desperate need of rebirth. Looking out from the rooftop of our hotel, we saw crumbling beauty in all directions, a beauty begging to be explored. We decided to hire a taxi and visit areas of Havana that don’t appear in tourist brochures or on websites.

Our taxi was a 1955 Chevrolet Bel-Air, four-door sedan. Its brushed-on, two-tone yellow and orange paint job was patched here and there with plastic tape that covered rust holes. One windshield wiper was missing. The chrome trim was held on with what looked like drywall screws. Climbing into the back seat was like getting into a time machine; I was suddenly a little kid again, back in my Dad’s old car.

Our driver let out the clutch. The car shuddered forward, but smoothed out once it got up to speed. As we bounced along, I was more convinced than ever that a beat-up, old “Yank tank” was the perfect vehicle for an authentic Havana experience. A new, air-conditioned cab just wouldn’t feel right.

Our guide started with standard tour patter, but this quickly became a conversation. We had questions, and she was happy to answer them, but she was always loyal to and respectful of her government.

As we threaded our way through the heavy traffic, she said: “We are legally allowed to buy and sell pre-revolution cars — 1959 or older, but if we want to buy a newer car, we first have to get approval from the government.” Under the new reforms, regulations controlling the buying and selling of cars will be loosened. A car like the one we were riding in costs the equivalent of $3,000 to $5,000, depending on its condition — exorbitant by Cuban standards.

Havana is full of vintage cars. Some are beautifully restored. Some are rolling junk piles. Most are somewhere in between. Replacement parts are rare, and everyone seems to be a mechanic. Wherever you look, someone is trying to coax a dead car back to life, with only the most basic of tools.

Traffic moves with a spastic, unpredictable rhythm, and speeding is a defence mechanism, not an aggressive act. Many cars have sirens in addition to horns, and drivers love using them. The smell of vehicle exhaust is overwhelming. Emission controls don’t exist, and every other engine seems to burn oil. I thought about rolling up the taxi’s window, but the window crank was missing.

As we rumbled our way toward Vedado, a residential district in the southwest corner of the city, we passed a large outdoor market, where dozens of produce-laden trucks were parked. People crowded around, buying inexpensive vegetables and fruit directly from farmers. Our guide said that this is how they supplement their government rations.

We asked about food rationing. She had the driver pull over, and took us into a bodega — a government run shop, about a quarter the size of a gas station convenience store. Behind a rough wooden counter, a stern looking official checked ration booklets, ticked off allotments, handed over food and other supplies, and collected money. “We pay for our food but prices are very low because the government subsidizes us,” our guide said. The new government reforms will gradually phase out these subsidies for those who do not need them.

She showed us a ration booklet. It listed a family name, the number of people in the household, and the amount and type of supplies allowed — a far cry from the shopping lists we take to our supermarkets.

We got back into our Chevy and headed off. We turned a corner, and a military policeman flagged us down. He looked inside the car, spotted two tourists, and ordered the driver out. “Don’t worry,” our guide said, “this happens all the time. He’s just checking permits and papers.” A few minutes of document shuffling later, we were back on the road.

In the centre of the square is a massive monument that stretches skyward. The monument is, by law, the tallest structure in Havana. Here, Fidel Castro delivered fiery, impassioned oratory to adoring crowds. It was hard to visualize that excitement, given that the square was totally deserted — except for a couple of Canadians, their guide and their driver.

Our next stop was Cristobal Colon Cemetery, founded in the 1870s. Thousands upon thousands of tombs — all above ground — are arranged like a silent, marble and bronze city. Meticulously carved sculptures and spectacular mausoleums mark the final resting place for generations of Havana’s elite. It’s a place of great serenity and beauty. On the way out, guards stopped us at the gate, and searched the taxi’s trunk. Our guide said they were checking to make sure we didn’t steal human bones, which are sought after by some religious cults, and used in dark rituals. Grave robbing is an issue.

Throughout Havana, you see colourful laundry hanging from almost every second and third floor window or balcony. Women are busy hanging it out or bringing it in. They lean out and chat with neighbours, or carry on conversations with people down in the street, before disappearing back inside to get on with the rest of their housework.

How does housing in Cuba work? Our guide told us: “The government assigns us housing, based on what our families need. Children, parents and grandparents sometimes all live together under one roof.” For young newlyweds, this is problematic. They often have no choice but to move in with their families — not an ideal way to start their new life together. She said that this forces many couples to marry later, and postpone having children.

Why don’t they just get their own place? “We are not legally allowed to sell or buy a home,” she replied. “Sometimes we can trade homes with another family, but this has to be approved by the government.” This situation will change, because new government reforms allow limited buying and selling of property.

Reforms will also affect employment in Cuba. Currently, the government has a monopoly over about 90 per cent of all economic activity, so virtually everyone works for the state. The average monthly wage is the equivalent of about $20 Canadian. Our guide said: “I am happy to work with tourists, because tips help support my family. Not everyone is so lucky.”

Over the next five years, more than one million government jobs will be eliminated and Cubans will be forced into self-employment. They will have to find new jobs, choosing from a government-issued list of 178 approved activities.

“But how do you start a business?” our guide asked. “You need money first. A restaurant — how can you afford to find a place? Hire staff? Buy food? We’re going to have to pay taxes — income tax, sales tax and payroll tax. How will it all work? How much money will we get to keep? How will the government collect all those taxes?” Taxes are a new concept in Cuba, and uncertainty prevails.

We pulled up at a tiny, locals-only booth outside Havana’s largest ice cream factory and bought some of the fabulous frozen confection. We wanted to go to John Lennon Park and see Lennon’s statue. Our guide drew a blank. She had no idea where it was. Neither did the driver. We eventually found it, tucked away off a back street. Sitting on a bench in the middle of the park, was a bronze John Lennon, bemusedly contemplating his surroundings. Locals paid him no mind.

Our tour continued, and we drove down streets of strikingly elegant, single family houses, constructed in the early 1920s. This is where the “rich Americans” used to live, our guide told us. But, like everywhere else, the houses have fallen into disrepair. Are they abandoned? “Oh, no,” she said, “families live there.” Some repair work was going on, but not much.

At one point, we came across houses that were beautifully restored. It turned out that they were not people’s homes — they were corporate offices and foreign embassies. One of these was the Canadian Embassy, which had its own power generator in the compound, making it immune to electricity rationing.

We criss-crossed the city, and our guide continued to show us ordinary life in Havana. We visited places where there are no hotels, no tourists, no souvenir shops. We saw poverty, certainly, but not squalor or desperation. We met people with self-respect and pride; people with the will and strength to persevere — despite odds that are heavily stacked against them. These are impressive qualities, and humbling ones.

Back at the hotel, we said goodbye to our guide and driver and thanked them. We gave them each a 10-peso tip. The driver’s face lit up, and he fought back tears. He rushed over and gave both my wife and I a huge, emotional hug. A few days before Christmas, he had just earned half a month’s salary for an afternoon’s work.

They climbed into the old Chevy taxi, and it rumbled away, disappearing into the thick Havana traffic. I wished them luck.

For the original report go to http://www.montrealgazette.com/news/taxi+ride+Havana+Bouncing+through+history/5340547/story.html#ixzz1WkmAnVyG

The gorgeous photo is by Robin Thom and can be found at http://www.flickr.com/photos/robinthom/3460344541/sizes/z/in/photostream/

2 thoughts on “A taxi ride in Havana: Bouncing through history”