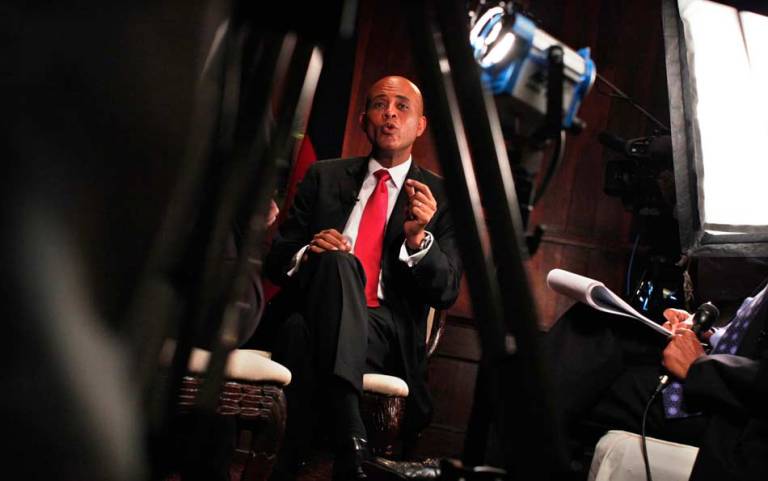 Still without a government, pop star turned President Michel Martelly is having a hard time meeting expectations during his first three months in office,Jacqueline Charles reports in The Miami Herald.

Tucked inside Guerda Anier’s purse is the creased invitation to President Michel Martelly’s inauguration. In the 100 days since, the tent city resident has spent much of her time sitting across from the collapsed National Palace waiting for Martelly to deliver on campaign pledges.

But the former musician who sold himself as a no-nonsense decisive leader has been unable to make good on most of his promises. He has not gotten his choice of prime minister approved in parliament and increasing tensions between Martelly and lawmakers have even his most ardent supporters wondering if any of the major policies he proposed will become law.

“I understand there is no government, but President Martelly stood right there,’’ said Anier, 43, pointing to a spot in front the Champ de Mars public plaza-turned-tent city near the palace, “and said ‘I have 30,000 houses but your president won’t give me the land to build them.’ Well, now he’s president. So where are the 30,000 houses? We’re still waiting.’’

Anier sold perfume and jewelry before the devastating Jan. 12, 2010 earthquake forced her to seek shelter on the downtown public square. She also is the kind of person Martelly promised to serve when he campaigned for Haiti’s toughest job. The cheap rum, cigarettes and plastic water bags she sells barely cover school fees and uniforms for her four girls. And while the pieces of worn aluminum offer cover from the sun, they don’t protect from the rain.

“I am trying to give them hope,’’ she said of her children, including a 13-year-old boy orphaned after the quake. “But how am I supposed to give them hope when I don’t have any? Today, there is more discouragement than hope.’’

Martelly’s first months have been spent inaugurating a housing loan program and schools. He launched a fund to support his free education initiative and last week announced a housing plan to relocate more than 5,000 families from six camps. He appointed advisers to the panel charged with Haiti’s post-quake recovery, and has called for its renewal by parliament. He has also promoted reconstruction, tourism, governance and technology projects.

But foreign diplomats say Haiti needs a government to turn the rhetoric into reality.

Free education and housing for the 600,000-plus in camps are just some of the promises Martelly, 50, made while campaigning. He assumed the Haitian presidency as global economic uncertainties threatened to reduce donor support and the legacy of the quake — increased poverty, decades of inept governance and slow reconstruction — led to budding frustrations at home.

“We need a government in a hurry,’’ said former President Bill Clinton, who co-chairs the panel charged with rebuilding the country. “The negative things that might have otherwise happened, have been so far severely limited because of the aggressive public posture that the president and his team have taken about getting more investments here…and doing things that look like little things, like these cleaning crews in the streets.’’

Still, infighting in Martelly’s camp, coupled with his antagonistic attitude toward parliament and penchant for foreign travel — he’s taken seven trips abroad amid the crisis — is creating uncertainty and concern. Also worrisome to lawmakers and foreign diplomats is the lack of transparency and policy over an education initiative he launched that tax phone calls and money from abroad.

Martelly’s inexperience team of mostly childhood friends and advisors billed the first three months of his term as an opportunity to bring tangible changes to the lives of Haiti’s 10 million citizens.

But months after his historic May 14 swearing in, Haiti remains in limbo.

Constitutional changes are oh hold; millions in international aid remain blocked by frustrated donors; investments and consumption are down, and inflation, which was at 6 percent when Martelly took power, is now at 9.3 percent. Even the budget for the Oct. 1 fiscal year is delayed. The delay constitutionally could force Martelly to use the previous government’s budget, further hampering him from making good on his promises.

“The president says Haiti is open for business, but nobody will come to Haiti if you don’t have a prime minister and functioning government,’’ said Kesner Pharel, a Haitian economist and political observer, who blames Martelly and parliament for the stalemate. “The inability of these people to get a prime minister is having a high cost in the economy.’’

Martelly declined through a spokesman to be interviewed for this report.

Lawmakers loyal to former President René Préval have twice rejected Martelly’s pick for prime minister, triggering renewed polarization and speculation that both sides are using the confirmation process to their own political benefit.

Critics say by refusing to negotiate, Martelly is either trying to dismiss parliament or blame it for being unable to meet his promises, including free schooling to 500,000 students in September. Others say all sides are waiting each other out until the end of the year when one third of the 30-member Senate will be up for grabs, allowing Martelly a chance to build his own majority by adding to current support.

“One has to wonder, in view of Haiti’s current impasse, just how much patience will Haiti’s downtrodden masses have before [a social] explosion will occur,’’ said Robert Maguire, a Haiti expert and professor at the George Washington University Elliot School of International Affairs. “Haiti’s political elites seem to be fiddling while Haiti burns.’

Last week, the private sector, Martelly and a majority of lawmakers each circulated their versions of a governance pact. At the same time, Martelly and his cousin, caretaker Prime Minister Jean-Max Bellerive, floated the idea of temporarily reinstating Bellerive’s governing powers to get the country moving. The U.S. and United Nations all oppose any interim government solution, insisting that Haiti needs a permanent government.

“The only person who can get the ball going is the president because he is the only one who can choose, but he cannot choose by himself,’’ said Sen. Steven Benoit, who has unsuccessfully tried to advise Martelly, a friend. “If he doesn’t deal …we can be all the way in December without a prime minister.’’

During a recent two-day visit, Clinton announced that the recovery panel was providing $30 million to help Haiti revitalize 16 quake-ravaged neighborhoods, emptying six camps where 5,239 families live. The $78 million project, while will help 5 percent of the people living in tents, will take 30 months to complete.

“We have a vision and we are starting,’’ said Patrick Rouzier, who is in charge of Martelly-led housing initiative. Rouzier said he was unaware of the president’s promise of free houses, but calls the current initiative a “huge accomplishment,’’ especially since it’s happening without a functioning government.

It’s the day after the housing announcement and Anier and her neighbors are convinced they will soon find relief. They do not know it but the downtown square is not among the six camps.

Lately, there have been protests around the Champ de Mars, and some politicians are complaining about “growing insecurity’’ in the tent city. Rumors have circulate that bulldozers will soon appear because the mayor recently announced plans to rebuild the capital and relocate camp dwellers to a barren mountain to the north.

The solidarity that erupted in the days after the quake has turned to discord and impatience. Few are outraged over a spate of recent evictions, and there is a sweeping sense that most camp residents aren’t homeless quake victims but individuals waiting for a handout.

On any given day, passing motorists in their oversized SUVs hurl insults at Anier, asking if sh is not tired of living like an animal.

“They’ve put all of us in the same boat,’’ Anier said. “All I dream about is getting out of here. Do they really think we like fighting the rats, the rain?’’