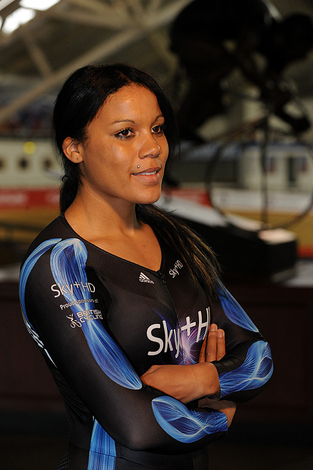 British BMX star Shanaze Reade took part in the London 2012 BMX test event, the UCI Supercross World Cup, which will be held on August 19-20, 2011. Today, Reade will tackle the course alongside Great Britain team mates and other world class athletes in the international competition which will see 64 men and 32 women battle for the top spot.

Professional British Bicycle Motocross (BMX) racer and track cyclist Shanaze Danielle Reade was born on September 23, 1988, in Crewe (Cheshire, United Kingdom) to a Jamaican father and an Irish mother. According to The Voice, “Reade may only be 22, but she is one of the most experienced racers on the circuit. Shanaze collected her first world senior title aged just 18 in 2007 and she has landed several major titles during a glittering career in the sport.”

For this round of the World Cup, though, Reade expects a challenge from Sarah Walker of New Zealand, the 2009 world champion, the current world champion, Colombian athlete Mariana Pajon Londono, as well as the Australian and French riders.

The 400-metre track where she will compete today is located next to the Velodrome in the north of the Olympic Park and will have 3,000 seats for the test event compared to 6,000 seats to host the Olympic BMX competition in 2012. The course “is characterized by a series of jumps, bumps, tightly banked corners and a unique tunnel underpass,” covering an area of 160 meters by 90 meters.