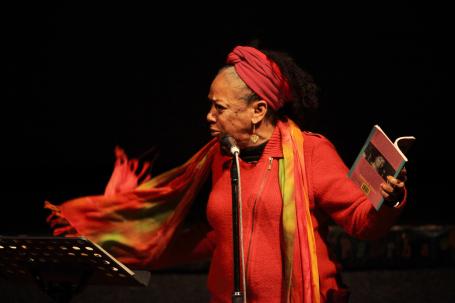 ONCE again, Jamaican poet, playwright and actress Jean ‘Binta’ Breeze lit up an audience with her poetry at the recent launch of her latest book Third World Girl.

Breeze’s poetic characters took life in arresting colours, shapes and moods; some poems comical (Riddym Ravings), others tearful (Brighteye), and some disturbing (Isaiah). But each poem was delivered with Breeze’s unmistakeable rhythmic force, which she performs so effortlessly.

Poet Linton Kwesi Johnson hosted the evening, in association with the George Padmore Institute and producers Renaissance One. Johnson and Breeze’s collaborative work began in the 1970s when, alongside artists like Michael Smith, Oku Onuora and Mutabaruka, they pioneered dub poetry; the famed Caribbean-born art form, which sees spoken word delivered over reggae rhythms.

“Dub poetry was a new orality in Jamaican poetry with an emphasis on spoken language, the Jamaican language, and a strong musical influence,” explains Johnson. “When I met Jean, it struck me that she was a special voice with a better understanding of the relationship between the musicality of the Jamaican language and reggae music itself, because quite a lot of people were just simply imitating what they thought I was doing and people like Michael Smith and Oku Onuora.”

Breeze left Jamaica for England in the 1980s, and upon the invitation of Johnson made her debut UK performance at the International Book Fair of Radical Black and Third World Books in 1985.

“She has gone on to earn a reputation for herself as a distinctive voice in British Caribbean poetry,” Johnson said of Breeze. “Her poem Riddym Ravings, also known as Mad Woman is regarded as a classic in contemporary Caribbean poetry.”

A dynamic storyteller, Breeze’s performances are so powerful she has been called a ‘one-woman festival’. A revered and respected artist, her poems use personal stories and historical narratives to explore social injustice and the psychological dimensions of black women’s experiences.

Speaking of her latest work, Third World Girl, which comes with a free DVD featuring Breeze performing live at Leicester’s Y Theatre, she adds: “When you see the picture of the woman on the book cover, her face says ‘If you touch me I will kill you’. There’s a picture of a girl with some really beautiful breasts. Do you dare touch her? No, you daren’t. She’s in control of her body and if she chooses to expose it, she can.”

Revealing the inspiration for the title poem, Third World Girl, Breeze explains: “I grew up on the north coast of Jamaica. The tourists came and went and in the early days, they’d all be on the same local beach.

“In the late ‘70s, hotel chains took over all the beaches along the north coast and started doing all-inclusive deals. I worked in a hotel up there in Negril. At that time, there were plenty of American women coming over, looking to rent-a-dread.

“But there were also male tourists who approached local women and were quite rude. That’s why I called this poem Third World Girl because I’ve heard stories like this from so many third world countries that depend on tourism. I wanted to explore how the black woman feels in those situations.”

Third World Girl is out now through by Bloodaxe Books. For more information, visit www.renaissanceone.co.uk

For the original report go to http://voice-online.co.uk/article/making-poetry-seem-breeze