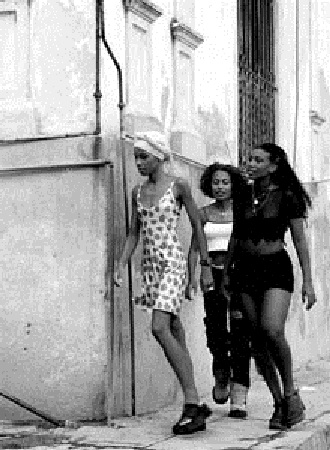 Sujatha Fernandes (New York Times) writes about established and up-and-coming Cuban rap bands that have been revolutionizing lyrics and young Cubans’ musical sensibilities in the past few decades. She reports on Instinto, “a female trio extraordinaire;” Primera Base; Hermanos De Causa; Obsesión’s Magia López; and the many cultural and political influences that have made Cuban rap a distinctive genre. Here are excerpts with a link to the full article below:

This is Cuban rap, where the streets meet highbrow art. It is an American-derived subculture that has flourished on the island despite — and in some ways, because of — the United States’ half-century-long embargo against Cuba. [. . .] Rap was originally an import. In the early ’90s, young Cubans built antennas from wire coat hangers and dangled their radios out of their windows to catch 2 Live Crew and Naughty by Nature on Miami’s 99 Jamz. Aspiring Cuban M.C.’s rapping at house parties and in small local venues crassly mimicked their American counterparts. “Just like you, just like you, nigger, we wanna be a nigger like you,” Primera Base rapped offensively about their hero, Malcolm X. The group was known to sport thick imitation gold chains and fake diamonds — even though “bling” was a remote concept given Cuba’s endemic scarcities.

But Cuban rap soon took on a life of its own. Unlike other hip-hop fans around the world, young Cubans had little access to the latest trends in American rap, so they had to look inward for inspiration. With only two state-run TV channels, they couldn’t tune in to the globally televised Yo! MTV Raps to see pioneers like Public Enemy or N.W.A., and Havana wasn’t on the touring circuit for De La Soul.

The embargo also kept out the key tools of background beats — samplers, mixers and albums — so Cuban rappers instead drew on a rich heritage of traditional local music, recreating the rhythmic pulse of hip-hop with instruments like the melodic Batá drums, typically used in ceremonies of the Afro-Cuban Santería religion. In the tradition of Cuban a cappella groups like Vocal Sampling—which conjured up full salsa orchestras solely through their voices—Cuban rappers made up for the lack of digital technology by developing the human beat box, mimicking not just drum machines but congas, trumpets and even song samples.

Cuban rap is also special for the caliber of its lyrics. Thanks to the country’s excellent and free schools, rappers — although predominantly black and from poorer neighborhoods — received a high degree of education. Cuba’s most prolific rap producer, Pablo Herrera, was a professor of English at the University of Havana. Rap lyrics mine Cuba’s literature and history in their portrayals of the tribulations of street life.

“I have a race that is dark and discriminated / I have a workday that demands and gives nothing,” rapped Hermanos De Causa in their song “Tengo.” The song reworked a 1964 poem that praised the achievements of the revolution for blacks; a new generation was watching those gains erode.

The increasing innovativeness of Cuban rap stands in stark contrast to American rap, where the diversity of sounds and themes has been eschewed in favor of a catchy pop formula with a focus on consumption. Hip-hop originated in the outdoor jams and battles of the Bronx during the 1970s, and commercial distribution began in 1979, when the Sugarhill Gang’s “Rapper’s Delight” became a hit. Global entertainment networks have promoted many influential rap artists, like Run-D.M.C. and Salt-n-Pepa, but today there is less and less room for American rappers to experiment with unconventional subjects and styles.

Cuban rappers avoided this fate for a number of reasons. One was government support. Initially, the government criticized the “racially divisive” culture of rap, but seeing how popular it was among the youth, the state soon came around. It began to support the annual rap festivals and now finances a yearly international hip-hop symposium. In Cuba, many musicians are full-time employees of the state, paid a monthly salary for performing, composing and rehearsing. Starting last decade, prominent rappers also entered into this arrangement, freeing them to be creative rather than producing generic salsa-rap fusions to appeal to foreign record labels.

The government’s interest in rap isn’t all positive, however. With state sponsorship comes state censorship: Rappers who criticize the government risk being censored on the radio or barred from performing in prominent venues. But censorship, like seclusion, can foster innovation. Cuban artists perfected techniques of metaphor, allusion and ambiguity to trick the censors. The rapper Magia Lopez of Obsesión defended a song, from her 2002 album, that was about prostitutes in barrios like Central Havana by saying that it was about capitalist countries. But she had never been to a capitalist country when she wrote it. The song takes on a universal appeal because of the artist’s need to dissemble.

This is, of course, not an argument in favor of state censorship or the embargo — which has deprived Cubans of basic necessities like food and medicine. The recent openings initiated by the Obama administration should be celebrated. But we can also recognize that some things, like the distinctiveness of Cuban rap, may be lost as the country opens up to a global market economy. It’s worth remembering that imposed, even self-imposed, isolation can be a crucible for artistic creativity.

Sujatha Fernandes is an assistant professor of sociology at Queens College and the Graduate Center, City University of New York, and the author of the forthcoming Close to the Edge: In Search of the Global Hip Hop Generation.

[Many thanks to Dale T. Matthews and Annie Paul for sharing this link.]