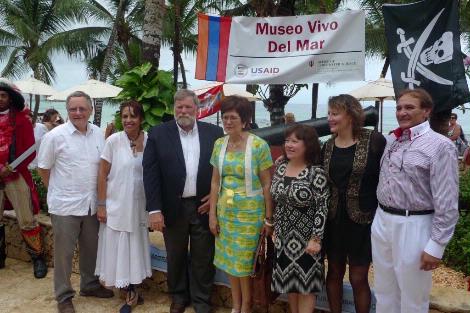 A museum commemorating Captain William Kidd and the wreckage of “Cara Merchant” (also known as “Quedagh Merchant” or “Kary Merchant”) was recently inaugurated in the Dominican Republic, The Armenian Reporter writes.

Captain Kidd captured the ship in 1698 to the south of India. The ship was carrying a precious cargo and was sailing under the flag of its owners at the time, Armenian merchants from New Julfa (Isfahan, Iran) who had emigrated to Surat (to the north of Mumbai, India) and traded between Bengal and Surat. After its capture, Kidd took the “Cara Merchant” to the Caribbean, where his henchman set fire to it in order to sink it and thus attempt to erase any signs that may have proved that an act of piracy had been committed.

The exact site of the wreckage of the “Cara Merchant” remained a mystery until its discovery, in 2007, by the archaeologists of Indiana University (Bloomington, State of Indiana, USA), close to Catalina Island, to the southeast of the Dominican Republic. After four years of research, scientists confirmed that the wreckage lying in this spot was indeed that of the “Cara Merchant.”

The ANAHIT Association set up by Pavel Galoumian and Isanbella Agad from Geneva, Switzerland also made its contribution concerning the identification of the ship through historic research on the Armenian merchants of New Julfa and Surat, and in particular on the owners of the “Cara Merchant.”

This globally important discovery also represents an important aspect of the history of these 17th century Armenian merchants and their considerable influence on international trade by both land and sea at the start of the modern era.

The inauguration that took place on May 22 and 23, 2011 was organized by the government of the Dominican Republic and Indiana University under the direction of Professor Charles Beeker, Director of the Office of Underwater Science at Indiana University, and was sponsored by the U.S. Agency for International Development (USAID), Indiana University (AWARE Foundation Project), the ANAHIT association, Viva Wyndham Dominicus Beach and the Asociación de los Hoteles La Romana-Bayahibe.

This inauguration was attended by numerous figures from the Dominican Republic, including the Ministers of Culture, Tourism, Environment, the Admiral of the Navy, as well as representatives of USAID, Director of the Children’s Museum of Indianapolis, Professor Charles Beeker and his colleagues and students from Indiana University, the Peace Corps, the founder members of the ANAHIT association and Mrs. Taline Avakian, President of the Armenian General Benevolent Union (AGBU) in Switzerland.

On May 22, an exact replica of a cannon belonging to the “Cara Merchant” was unveiled and fixed to the Viva Wyndham Dominicus Beach Resort in Bayahibe (La Romana, Dominican Republic) and the flags of the Republic of Armenia and the 17th century Armenian merchants were also hoisted above this cannon.

On May 23, a similar replica was placed and fixed in the main square of the village of Bayahibe. A parade and explanations about the history of Captain William Kidd and the “Cara Merchant” took place for the children of this village, who now know who Captain Kidd was and who have also learned that there is an Armenian nation which will henceforth be part of their historical heritage.

A museum of Captain William Kidd and the wreckage of the “Cara Merchant” on Catalina Island opposite Bayahibe, the exact spot where this Armenian ship was wrecked in 1699 and where the rest of its wreckage is still to be found today, will open next year. A living museum will be created under the sea and later also on the island itself.

At the time of this important event, an Armenian flag will be flown on the site of the wreckage of the “Cara Merchant.”

From the perspective of science “Cara Merchant” represents a unique discovery which has made it possible to describe with precision the methods of ship construction used in India in the 17th century.

From the viewpoint of Armenian historical heritage, this is a unique and concrete example of the type of maritime trade that Armenian merchants were carrying on at this period.

During his trial in London, Captain Kidd gave a comprehensive description of the contents of the cargo of the “Cara Merchant” and also confirmed that the ship belonged to Armenian merchants. This also appears in the ship’s authentic French pass which has been recovered and which still exists.

This is a unique opportunity for the Armenian nation to promote an important if little-known aspect of its history.

The ANAHIT association thanks Taline Avakian, chairwoman of AGBU-Switzerland, for the support to this project which has made it possible to bring to light an important part of Armenian historical heritage.

For further information, contact the ANAHIT association (Armenian Nautical Association for the History of Intermaritime Trade): Dr. Pavel Galoumian (+4179 417 5379) or Mrs. Isabella Agad Galoumian (+4178 919 7300) or by email agatrad@yahoo.fr or anahitltd@ymail.com  as well as Indiana University Prof. Charles Beeker at cbeeker@indiana.edu.