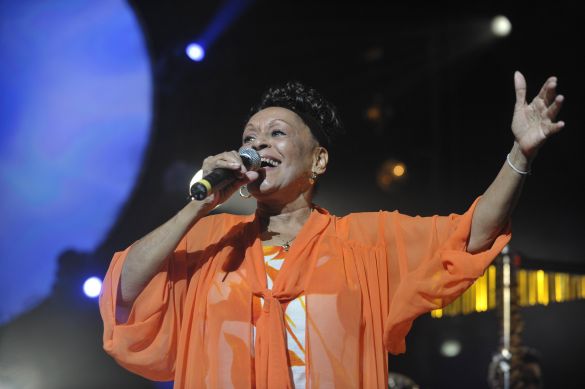 Orquesta Buena Vista Social Club, the 13-member band that carries on the work of the Cuban cultural phenomenon, will play in Moscow later this month. Nick Dowson of The Moscow Times spoke to singer Omara Portuondo, 81, whose career has spanned half a century starting with her time in the famous female singing group Cuarteto d’Aida.

You have had an extraordinarily long and successful career as a singer and dancer. Did you ever imagine it would be like this?

Oh, I never imagined this, but my mother told me once: “You are going to take our culture all over the world.” And here I am! There have been so many amazing moments in my life, it is difficult to mention one! I love music and have been fortunate to have a profession that I truly adore — as I have for many years!

I have also been fortunate to have had the opportunity to work with some outstanding musicians, from all that are part of the Buena Vista family, the guys that I’m on tour with, Guajiro, Aguaje, and those that have passed on, Ibrahim, Ruben, Cachaito, Compay.

Are you looking forward to your visit to Russia?

It is always nice to come back to places we’ve already been, even if we don’t have so much time to visit the city. I don’t want to spoil the surprise, though I will say that we will be performing a selection of well-known songs such as “Veinte Anos,” “Chan, Chan” or “El Cuarto de Tula.” I’m sure the audience in Moscow will be up on their feet!

You’ve visited Russia many times, both before and after the end of communism. How has the country changed to your eyes?

Every time I’ve been in Russia I felt a very warm welcome from the people, so for me there hasn’t been any huge difference before or after the end of communism.

Working together with Ry Cooder and with Nick Gold and Juan de Marcos Gonzalez during the recording of the Buena Vista albums, we all knew something special was being recorded. There was a great atmosphere in the studio.

What is Cuba’s musical secret?

Well, Cuban music has its roots in Africa, Europe and Latin America. The slaves brought their rhythms from the west coast of Africa, elements of Spanish and French musical styles were added to that … and a little of the Latin American styles, tango, bossa nova, were mixed into the pot. From these wonderful roots grew Cuban music. Regarding the future, it looks very good, the younger musicians are constantly evolving Cuban music, taking the traditional sounds and adding their own special touches on top.

Your musical career has spanned a range of genres. Which do you most enjoy singing in?

Have politics and Cuba’s past relationship with Moscow and the Soviet Union affected your music?

As I mentioned before, the music that I have sung over the years is more based on emotions than on politics! And over these years, I have sung Cuban music. In the 1960s, ’70s and ’80s, a number of Cuban musicians and I did travel to the Soviet Union and to Eastern Europe, where we would perform at festivals and tour. It was a great opportunity to meet local musicians and have the chance to listen to other types of music.

In the event you are heading to Moscow, Omara Portuondo and Orquesta Buena Vista Social Club perform July 26 at 8 p.m at Crocus City Hall, located at the 65th-66th kilometer of the MKAD. Metro Myakinino. Tel. +7 (499) 550-0055, www.crocus-hall.com.

For the original report go to http://www.themoscowtimes.com/arts_n_ideas/article/buena-vista-singer-portuondo-81-going-strong/440437.html