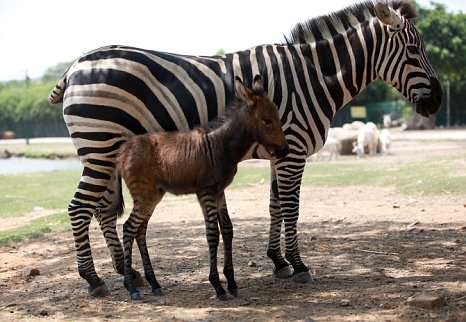 A Cuban zoo has reported the birth of a rare animal that is a cross between a donkey and a zebra, the Latin American Herald Tribune reports.
The “donkra” has features characteristic of both parents and appears healthy and vital seven days after being born, according to specialists caring for the animal at the zoo in Ciego de Avila, a city 423 kilometers (260 miles) east of Havana.
His large, robust body and brownish coat are characteristic of his father, while the animal inherited from his zebra mother his striped ears, long legs and the black line running from head to tail, images broadcast on television and posted on the official Cubadebate Web site showed.
“This was the first time the zebra had given birth and we knew this was possible because, even though they come from different parts of the planet, they are genetically compatible animals,” zoo director Fidel Yera said.
The cross between the African zebra, who was being given a special diet to help her nurse her suckling, and the Cuban donkey resulted from their being placed in the same stable.
Though considered a rare occurrence on the island, other similar births have been reported at zoos in Havana and the eastern city of Santiago de Cuba

For the original report http://www.laht.com/article.asp?ArticleId=405108&CategoryId=13003