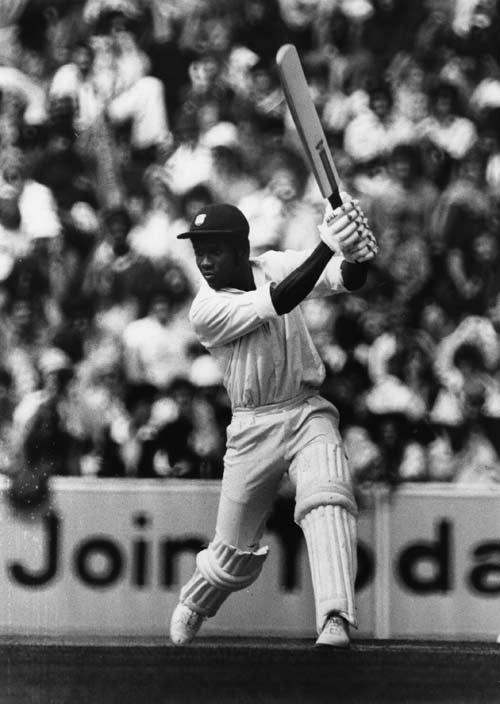 Sriram Veera, writing for ESPN, reports on Lawrence Rowe’s apology yesterday for his playing in South Africa in 1983. Whereas I can’t bring myself to be as forgiving as Veera is on his take on Rowe’s legacy, it is otherwise a fair assessment of Rowe’s undisputed brilliance as a cricket player.

Celebration and remorse were both in the air. And closure. In an extraordinary statement, 28 years after he was shunned for going on a rebel tour of South Africa, Lawrence Rowe apologised for going on that trip in 1983. He dubbed Monday as the “final death of that tour”.

It started as a day of joy. Rowe, Michael Holding and Courtney Walsh were immortalised in the Sabina Park stadium during the lunch break of the first Test between West Indies and India. The two ends were named after Holding – his wife was there for the unveiling- and Walsh, while Rowe’s name was attached to the pavilion.

Rowe smiled and Walsh even allowed himself a laugh before Rowe read out his statement of apology. “About 28 years ago, a team of West Indies cricketers toured South Africa. At that time South Africa was banned for the apartheid regime. That tour and other such tours were grouped together as rebel tours. It was organised and conducted without the approval of West Indies’ cricket board. Such tours were in fact outlawed by cricket boards over the world, by governments including the government of Jamaica and by other international organisations like the United Nations. Understandably, that tour upset the people of Jamaica. Today I sincerely apologise to the cricketing fraternity of Jamaica, the Caribbean and the rest of the world.”

It wasn’t expected by the press and there was a moment of surprise before cynicism entered the minds of a few. Was the apology sincere? “If it wasn’t sincere I wouldn’t have done it,” Rowe said. “Jamaica Cricket Association decided to honour me and I thought before I accept it I should apologise.”

Life wasn’t easy for Rowe after that fatal tour. There are reports that he would hide in the Kingston club to watch Tests in Sabina Park. There was anger in the air. Time is a healer. “When I came back, I had to leave the country and go to the States,” Rowe said. “At that time the crowd reception was hostile but I have been back after that. I have been accepted and treated fairly. Even today, people were cheering for me.”

That they did. The sparse crowd cried out his nickname “Yaga” as he walked out to the middle of the unveiling ceremony. Rowe, of course, had the crowds coming out in droves in his younger days. Tony Cozier still remembers Rowe’s triple-hundred at the Kensington Oval. “Gates were broken, walls were scaled and even high-tension electric cables were used by people to get in.” Rowe, himself, couldn’t enter. “We had to be escorted in,” Rowe told ESPNCricinfo. “It was a special day. I went on to score that 300.”

It was a six that he hit the day before that had excited the crowd into such fervour. Bob Willis was bouncing Rowe. “I don’t hook early in my innings.” Willis was trying to get him do it. One delivery reared up towards the face when Rowe hooked it off the peak of his cap and it went screaming over backward square-leg. It was a flat six. The crowd went wild. Rowe remembers it vividly. “Geoffrey Boycott was standing at the backward square-leg boundary and it flew barely a few feet over him. I had connected it really well and hit it hard.” The next day was a rest day. The word spread like fire. Rowe was in his 40’s and the crowd knew that there was going to be something special from him the next day. The talk spread from bar to bar on that rest day and it gathered momentum. It went over the boil the next morning and the whole of Barbados, almost, poured into the Kensington Oval

Rowe’s most famous knock was the 175 he hit in the World Series in Australia, organised by Kerry Packer, against Dennis Lillee and Co. It’s a stuff of folklore but it’s not Rowe’s best innings. He rates a 66 he hit in Sydney as his best. “The pitch was so green and they had Lillee, Thomson, Max Walker. The ball was flying and moving around. And I managed to play my shots. It was a great feeling. That 175 was my most dominating knock of course but I really cherish that 66 on that track.”

It wasn’t the rebel tour that killed Rowe’s career. The end had begun a while back. Rowe’s life almost fatally attracted tragedy. His knee gave way during a game in Trinidad, an eye disease was discovered in London and he had an allergy to grass, a perverse ailment to strike a cricketer. The knee injury, that happened in 1973, was wrongly diagnosed by a doctor who thought it was just a mild strain and the cast was removed.

“That was a mistake. It was a ligament tear and took me a year to really recover. I suffered because of that during the England tour.” The eye disease – a “rare case of stigmatism” – was found out almost accidentally in a restaurant by the manager Gerry Alexander. “I was peering into a menu and was holding it really close to my eyes when Gerry asked me what’s wrong with me. I hadn’t even realised my eye was affected.” The right eye had a perfect 20-20 vision but the left eye was giving up on Rowe. He tried spectacles but everything looked “oblong and hazy”. “I was told I was soft. I would call it bad luck.”

Having lost the fluency that he was known for, Rowe started to turn against himself. He couldn’t accept his game, hailed across the cricketing world as the most graceful batting seen in history, was drifting away from him. Paranoia seeped in. In a festive game in England, people had thronged the ground to see him bat. Rain came down to leave the pitch damp and Rowe refused to come out to bat. Michael Holding, a great fan of Rowe, wrote a revealing line. “He couldn’t be the Lawrence Rowe that people were expecting.” And he didn’t come out to bat. “The fear of failure gripped him,” Cozier said.

Was he a special batsman? “No-one better than him,” Cozier said. “No-one. He was the most graceful batsman that you could dream to see.” Rowe was blessed. He was then cursed. Greatness eluded him but luckily, on Monday, as West Indies took on India on the same ground where he had a dream debut, he found some sort of redemption. The man they called Yaga was all smiles at his Sabina Park. It felt good.

For the original report go to http://blogs.espncricinfo.com/tourdiaries/archives/2011/06/rowe_apologises.php