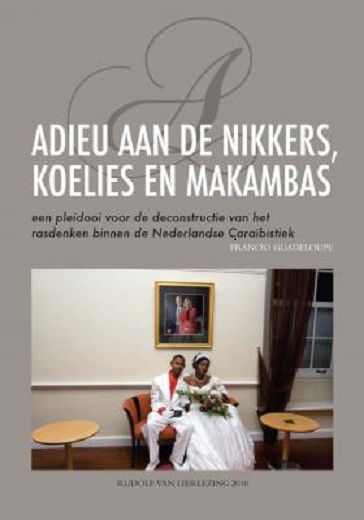 Adieu aan de Nikkers, Koelies en Makambas: een pleidooi voor de deconstructie van rasdenken binnen de Nederlandse Caribistiek (2010) [Farewell to the Niggas, Coolies, and Crackers: A Deconstruction of Racialism in Dutch Caribbean Studies] is Francio Guadeloupe’s most recent essay. It is indeed on my nightstand—a beautiful tome—but I do not read Dutch; therefore it reminds me daily that I must take an intensive Dutch language course. For the moment, I will await the English language translation (or French, or Spanish) and look through the essay, picking up a word here and there. [Any translators out there, up to the task?]

Description: No serious scholar in the field of Dutch Caribbean studies would claim that race is a biological given. Like their peers in other parts of the world, they too argue that race is a social construct. Deconstruction of the biological grounds of race goes hand in hand with its acceptance as a social fact. In this configuration the task of anthropologists and all students of Dutch Caribbean dynamics becomes that of describing how race matters and is constructed in the various domains of life in the Kingdom of the Netherlands and in Suriname.

Francio Guadeloupe’s newest essay Adieu aan de Nikkers, Koelies en Makambas, based upon his Rudolf van Lier Lecture of 2010, is a heretical move within this reigning common sense. In his meta-critique of Dutch Caribbean studies, Guadeloupe argues that the acceptance of the paradigm of the social constructed nature of race continues to go hand in hand with the use of the 19th century racialized division of Caribbean folk and Caribbean cultures in Creole/African, Hindoestaans/Indian, Javaans/Javanese, and Blank/white variants. This seemingly neutral classificatory device, which Guadeloupe avers is the more presentable side of how as an effect of colonialism the world was divided in niggas, coolies, and crackers, remains the basis of the essentialist conceptual arsenal of Dutch Caribbeanists. Guadeloupe argues that both the bathwater of biological notions of race and the baby of colonially derived ethnic essentialisms need to be thrown away.

In this essay which is a combination of ethnographic descriptions on the Dutch Caribbean and the Netherlands, and theoretical reflections based upon critical readings of the likes of Franz Fanon, Michael Taussig, Jean Luc Nancy, and Michael Carrithers, Guadeloupe demonstrates how Dutch Caribbeanists can write truthfully without having to write racially; without having to contribute to the dead end reification of race. How? By presenting thick descriptions of how our interlocutors are perpetually deconstructing the very racial categories they imprison others and themselves in. In the end Adieu aan de Nikkers, Koelies en Makambas, is a wager, “don’t ask whether it is possible or not to do away with race in your scholarship, just start by doing so.” Fake it and in the end you will make it.

Dr Francio Guadeloupe is a lecturer and researcher at the University of Amsterdam. His main research foci has been the manner in which hegemonic and counter-hegemonic discourses on national identity, multicultural recognition, migration, and the role of religion in post-imperial polities, (un)wittingly bear traces of our long colonial moment. He is currently researching the manner in which European citizens born on, or with kinship ties to, the Caribbean outposts of the EU—the French, Dutch, and British Antilles—appraise the culturalisation of citizenship in the Netherlands, France, and the United Kingdom. Guadeloupe’s work includes, among others, his most recent book, Chanting Down the New Jerusalem: Calypso, Christianity, and Capitalism in the Caribbean (University of California Press, 2008) [see previous post What’s on our Nightstands: Francio Guadeloupe’s Chanting Down the New Jerusalem].

For further descriptions and reviews (in Dutch), see http://www.ru.nl/cidin/general/recent_publications/@779910/guadeloupe-adieu/

For an interview of Guadeloupe by Rita van der Heul (in Papiamento), see http://www.rnw.nl/papiaments/article/den-spotlait-francio-guadeloupe