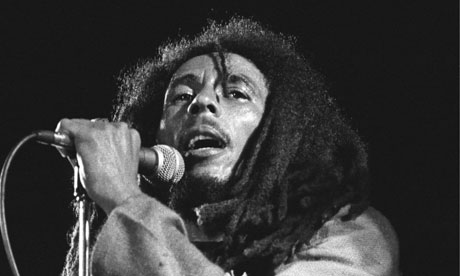 22 April 1978: Number 36 in London’s Guardian’s series of the 50 key events in the history of world and folk music. This one was written by Robin Denselow. We are posting the items from the series that deal with Caribbean music and performers. For the full series follow the link below.

The One Love Peace Concert, held in the outdoor National Stadium in Kingston, the Jamaican capital, was the longest and most political reggae concert ever staged, and one of the most remarkable musical events I have attended. That day in April was a remarkable day for Jamaican reggae and its greatest celebrity, Bob Marley. It started at 5pm, and ended, under a full moon, in the early hours of the following morning with the prime minister Michael Manley and opposition leader Edward Seaga embracing two previously notorious rival gang leaders, Bucky Marshall and Claude Massop. The two political leaders then joined hands with Bob Marley, in an emotional scene that was made all the more bizarre by the billowing marijuana clouds provided by the watching Rastafarians.

This was a crucial period in Jamaican politics. The city’s ghettos had been torn apart by the gun battles between Marshall and Massop’s quasi-political street gangs (Massop supporting Seaga’s Jamaica Labour party, and Marshall favouring Manley’s ruling People’s National party, PNP). Now, the two sides had declared an uneasy truce and the Peace Concert was planned to celebrate the ending of the killings and also the visit to Jamaica exactly 12 years earlier by the Ethiopian leader Haile Selassie, regarded as a deity by the Rastas.

This was also the first concert that Bob Marley, Jamaica’s international celebrity, had given in his homeland in a year and a half. He had left the country after what appeared to be a politically motivated assassination attempt in December 1976, when unknown gunmen, assumed to be linked to the JLP, fired on him inside his home, wounding the singer in the chest and arm. Opposition groups claimed that Marley supported Manley, because he had agreed to appear at the Smile Jamaica free concert, organised by Manley, which aimed to stop fighting between the warring political street gangs.

The Peace Concert had many of the same aims, but very different organisation. This show was put together by the gang leaders Marshall and Massop, who now called themselves a peace committee and said that their aim was to raise money to improve conditions in the Kingston ghettos. The audience was divided into sections marked “togetherness”, “love” and “peace” (peace being the most expensive ticket), while the government provided extensive police and military assistance to stop any trouble. There was even a ban on the sale of oranges in the stadium, as they were considered to be potential weapons.

Considering the background, the Peace Concert was a remarkably easy-going event. The crowd was informed that Mick Jagger and the foreign press were present, and watching them, and there were constant chants of “peace” from the Rastas. For their part, the politicians and security forces refused to be publicly angered either by outspoken comments by the musicians or the blatant marijuana smoking by the Rastas. If they had reacted, there would have been a riot.

The concert was a who’s who of Jamaican reggae, including veterans such as Big Youth and the Mighty Diamonds alongside newcomers Althea and Donna. Many of the best songs of the day were the most topical, with the hefty Jacob Miller adding lyrics about Massop to the tune of The Streets of Laredo. He then sang The Peace Treaty is Going On, Hurrrah, to the tune of Johnny Comes Marching Home, lit an enormous joint, jumped down in front of the prime minister, and put on a policeman’s helmet. He knew that no one would dare arrest him.

Peter Tosh must have upset the prime minister even more with a bitter and personal attack from the stage, in which he accused Manley to his face of not doing enough to help the poor. Now it seemed that there might be a riot, but Tosh moved on to the safer topic of marijuana, with a long version of Legalise It, and the situation was defused.

Bob Marley headed the bill, preaching unity and showing why he had become an international star, with a short set that included Trenchtown Rock, Natty Dread and War. He was not singing as well as he had at his memorable London shows at the Lyceum in 1975 or Rainbow in 1977, but was still exhilarating to watch, and it would have been impossible for any other artist to create such a theatrical, emotional finale. He improvised the lyrics to Jamming, demanding “could we have here on stage the presence of Mr Michael Manley and Mr Edward Seaga? I just wanna shake hands and show the people that we’re gonna unite”.

And he did just that, before easing into One Love, as gunmen, opposing political leaders and Rastas embraced. It was an extraordinary, if brief, moment of hope for Kingston; Bob Marley could hardly be blamed for presiding over a Peace Concert that failed to end the violence.

For the original report—and access to the full series—go to http://www.guardian.co.uk/music/2011/jun/16/bob-marley-peace-concert