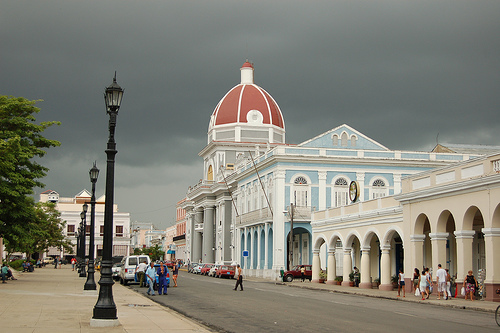 Cuba was once the world’s leading producer of sugar. Today, it exports only about two million tonnes of raw sugar a year and the crumbling remains of ingenios (sugar factories) can be seen all over the country. However, the sugar barons of the 19th and early 20th centuries left behind more enduring legacies, such as in the central Cuban city of Cienfuegos, as Jill Worrall writes.

El Bulevar (Boulevard) seems a suitably stately name for the No 1 shopping street in Cienfuegos. It was living up to its name when we visited, because not only were the shops lining each side of the pedestrian zone open for business, but the street was crammed with stalls.

Whereas some of the government-run shops looked a little light on stock, the stalls were overflowing with goods. The reason for this became obvious once we began chatting with the vendors.

Cuba’s communist government has only recently opened the doors to private enterprise, including allowing artists and craftspeople to sell direct to tourists. 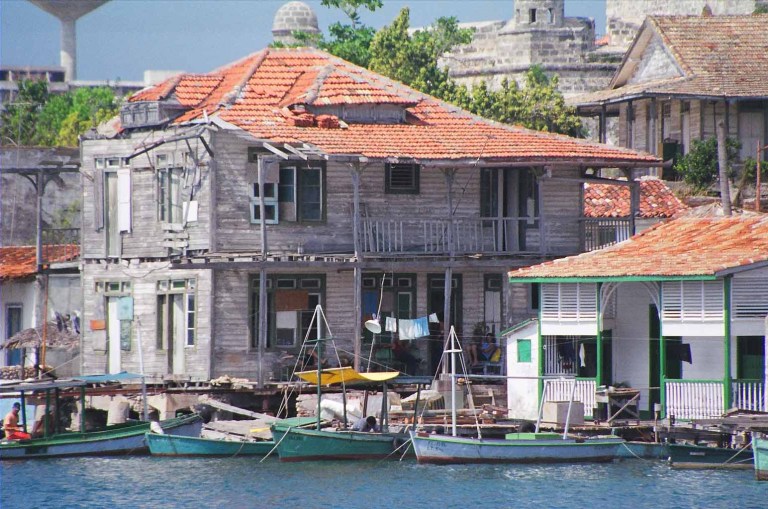 The scene down El Bulevar is the first flowering of this foray into entrepreneurship for many Cubans.

There were handmade leather shoes and sandals, baby clothes, hand-sewn dresses for little girls and sundresses for women, the latter created in the vibrant colours of the Caribbean.

There was jewellery too: raw materials such as gold and silver are out of reach of most Cubans, but some of these enterprising new artists have found a way around that.

I picked up a bracelet made of silver, a little puzzled as to why it was relatively cheap. Then I noticed the man running the stall was making more of them from old silver cutlery, bending the fork tines to create his designs, then setting pieces of handmade glass into them.

Nearby, another artisan had picked up on tourists’ fascination with Cuba’s still impressive collection of working 1950s-era American cars. He was making papier mache number plates and brightly coloured replicas of the cars.

There were the usual suspects too, of course. Cuban revolutionary berets and more Che Guevara T-shirts than you could shake a cigar at, but no matter they were selling, there was a feeling of enthusiasm in the market.

We glanced in the shop doorways as we made our way past the stalls.

One of the largest unisex hairdressing salons I had seen anywhere was doing a roaring trade, its hairdressers accompanied by pumping reggae. Close to the windows where the light was best, manicurists were bent over their work.

The pedestrian zone ends on the corner of the heart of Cienfuegos, Parque Marti. The entire old city of Cienfuegos is a Unesco world heritage site and the square is an example of why it is considered a global treasure. It is also a testament to the wealth that sugar once brought to the region.

A relatively young town in Cuban terms, Cienfuegos was founded in 1819 by French settlers from America and Haiti. As a result, it has a decidedly French provincial town feeling. There are few modern buildings to spoil its neo-classical facades and collection of palaces and public buildings.

Parque Marti is flanked by stunning buildings, including an Italian-style theatre, where in the early 1900s, world-renowned opera stars Sarah Bernhardt and Enrico Caruso sang, and a palace built for one of the region’s many sugar magnates.

Among the plantations that surrounded the city was one owned by the Hershey family, now best known for its chocolate.

Cienfuegos is also famed for its location on a bay that was once called the Pearl of the South. The first European to see it was Christopher Columbus in 1494. Today, the sea still sparkles and the 19th-century palaces of the sugar barons lining the narrow spit that juts into the bay are receiving some much needed restoration work.

But you do have to ignore the signs of heavy industry across the bay – a legacy of Soviet-era contributions, which includes a mothballed nuclear power station.

Near the end of the spit is one of the most striking of the palaces. It was built by rich sugar merchant Acisclo del Valle Blanco, who was one of the wealthiest men in Cuba at the time. Begun in 1913, it took four years to build and the result is extraordinary, as it combines Gothic, Venetian and neo-Moorish styles in the one construction.

Not content to try to mix the three, Senor Blanco decreed he wanted three towers each of a different type, so the two-storeyed arched and porticoed palace has three distinctive towers symbolising power, religion and love.

Dictator Fulgencio Batista, who was ousted by Fidel Castro, had planned to turn it into a casino, but the revolution intervened and today it is a restaurant. Visitors are allowed to roam through the dining areas, climb to the roof terrace to admire the towers and the bay and indulge in free pina coladas.

Cocktail bars are an integral part of most sightseeing destinations in Cuba.

Cienfuegos is home to one of Cuba’s main fishing fleets and, as a result, the nearby yacht club restaurant was offering a mountain of fresh prawns for lunch.

The sugar millionaires of Cienfuegos left the region with another beautiful legacy – the Jardin Botanico Soledad.

This garden, which is more akin to what we know as an arboretum, was originally established by sugar plantation owner Edwin Atkins in 1912 as a sugar cane research centre on a corner of his sugar plantation.

However, he seemed to have become fascinated with tropical plants and soon more the four hectares were filled with exotic vegetation.

The University of Harvard took over the garden in 1919. It is now the property of the Cuban government and is one of the largest botanical gardens within Latin America, covering about 90ha.

The main drive through the park is lined with Cuba’s national plant, the Royal Palm, but there are more than 250 other palm species here.

One of the garden’s botanists showed us around, but was reduced to being a supporting act when we spotted half a dozen emerald hummingbirds drinking nectar from one of the flowering trees. We stood entranced until a polite cough reminded us we were supposed to be on a botanical safari.

“There is a particularly beautiful flower over here I’d like to show you,” our guide said, in an endeavour to coax us away, adding what he hoped would be the clincher.

“And when we finish at the information bar we have a cocktail bar.” Of course they did, this was Cuba.

For the original report go to http://www.stuff.co.nz/timaru-herald/features/travel/5136996/A-city-built-on-sugar