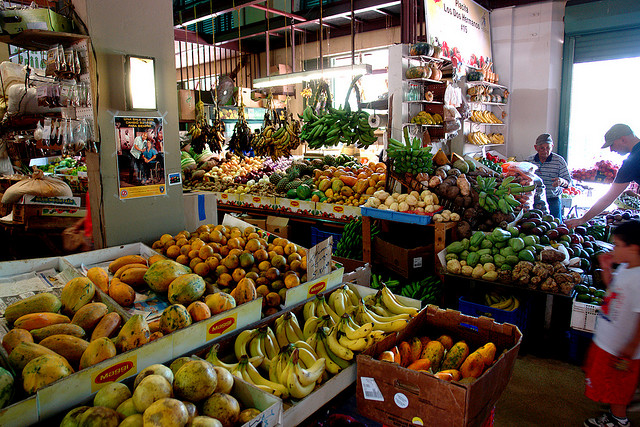 Governments in the Caribbean, where dependence on imported food has ballooned in recent decades, are calling on citizens to tend to backyard vegetable plots and buy local produce to save money and stave off a possible food crisis, the Associated Press reports.

Eager to avoid unrest over the rising cost of food, several island governments are giving away seedlings and gardening kits while promoting a grow-it-yourself approach, just as the U.S. did during World War I and World War II by encouraging citizens to plant “victory gardens.”

In a gritty slum in Jamaica’s capital of Kingston, Beatrice Buchanan is among those who have planted vegetables and fruit as insurance against spiraling food prices.

The 42-year-old nanny has long used her cramped front yard to earn money, caring for neighbor’s children there and selling secondhand clothes from a folding table. Now she’s counting on a newly cultivated patch of soil in her backyard for extra money and to put healthy meals on her family’s table.

Buchanan spends her evenings tending a small garden of dark, leafy callaloo greens and sweet peppers behind her concrete home in a neighborhood of low-slung buildings and narrow, pitted streets.

“Believe me, if I didn’t start up this garden I’d be struggling a lot more now with the market prices going up, up, up,” she said as her sister and teenage daughter helped prepare dinner near a roughhewn hutch where she raises rabbits for meat.

Statistics from Jamaica’s consumer affairs commission show the cost of many staples has at least doubled in the past six years. In February, a pound of rice cost the equivalent of 51 cents, up from about 20 cents in January 2005. The price of a pound of dried salted fish went from about $1.60 in early 2005 to about $3.70 earlier this year.

Even in Caribbean countries with a strong tradition of agriculture, like Jamaica, most impoverished people buy their food and are threatened by the rising cost.

Caribbean leaders “are very concerned and are seeking solutions as the electorate in many countries are on edge and agitated,” said Florita E. Kentish, a Barbados-based coordinator for the U.N.’s Food and Agriculture Organization.

Global food prices have jumped by more than 43 percent since last June, according to the World Bank, due to surging oil prices, bad weather and export restrictions by food-producing countries. Many experts project a rerun of the 2007-2008 food crisis, when high prices led to violence and political tensions in some parts of the world.

The problem is aggravated in the 27 countries and territories of the Caribbean because of high import taxes on the $4 billion in food brought in each year. Caribbean tastes have been turning toward wheat and other grains from abroad rather than abundant local crops such as yams, cassava, sweet and hot peppers, tomatoes, cucumbers, carrots and pumpkin.

“What we’re saying is there is a little space somewhere where you can grow a little callaloo or bok choy or bell peppers and the reward of consuming that, or sharing it with your neighbors, or trading it with your community is a reward that is second to none,” Agriculture Minister Christopher Tufton said at a recent event where islanders received free gardening kits.

In Antigua and Barbuda, a country of just 87,000 inhabitants, the government has distributed 100,000 vegetable and fruit seedlings to a small army of backyard farmers.

“Food security is everybody’s business. At this point in time, it is critical that we boost food production,” said Jedidiah Maxime, the nation’s acting director of agriculture.

It’s not just poor people who are creating backyard gardens. Some professionals are also getting down in the dirt.

“I was able to sell more than 80 pounds of potatoes and other crops from the backyard garden, and I’ve got no intention of stopping now,” said Dr. Trevor Friday, a physician on the southern Caribbean island of Grenada.

Grenadian Agriculture Minister Michael Lett said his government wants “to get people back to the land so we can at least feed ourselves.”

Roughly 32 percent of the island’s 108,000 residents live below the poverty line, and the 2007 food crisis shook the country.

Nobody expects backyard gardens to solve the Caribbean’s food problems, but officials hope more islanders will take control of what they eat.

A few houses down from Buchanan, Norman Hamilton, 30, has thrown himself into gardening with gusto. His yard boasts rows of callaloo, sweet and hot peppers, tomatoes, potatoes and trees bearing breadfruit, plantain and mango. Six goats live inside a wooden pen and chickens peck at the ground. Several Dobermans patrol the property to protect against thieves.

“When a plant you’ve put in the ground as a seedling is ready to harvest, it’s just a great, great feeling,” Hamilton said, as one of his dogs devoured a fallen mango. “It really feels like you’re accomplishing something real.”

For Fitzroy White, an unemployed parent raising two small boys in a squatter settlement in a poor area of Kingston, gardening holds a greater sense of urgency. His backyard is filled with plantains, yams, sweet potatoes and ackee, a red-skinned fruit with pods of golden flesh.

“The way things are, I can’t afford to buy much food so I’ve just got to grow a lot of it,” White said as a friend tended the family’s one-pot meal, a simmering kettle of rice and red peas. “There’s just no other way to feed my family.”