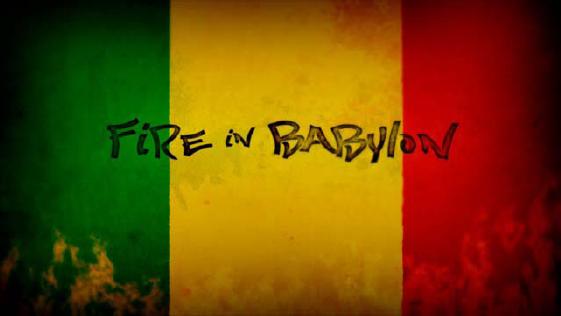 FIRE in Babylon, a documentary on the all-conquering West Indies cricket team of the 1970s and ’80s, was voted the Most Outstanding Film of the just-concluded Reggae Film Festival, Basil Waters reports for Jamaica’s Observers.

Produced by award-winning United Kingdom filmmakers John Battsek (One Day in September) and Charles Steel (Last King of Scotland), Fire in Babylon gives viewers “a mixture of sharp, inspiring and amusing tales that paint a picture of an extraordinary era when cricket evolved from a game to a revolutionary movement”, the film’s companion handbook explains. The tales, it added, are delivered through the memories of the members of the team who are now regarded as legends.

“I learned something that I did not know before about West Indies cricket, in that the West Indies cricket team of the 1970s and ’80s — led first by Clive Lloyd and then taken over by Sir Vivian Richards — in fact is the most successful team in the history of team sports, dominating world-class Test cricket for 15 years,” admitted project consultant Colin Leslie.

“That is unprecedented in the history of team sports across the world,” he added. “So the West Indies cricketers have that to their credit; something that very few West Indians know.”

Leslie also claimed that the film has made serious inroads in England and “has become the most successful documentary in the film history of London”.

According to Leslie, a number of universities have expressed an interest of screening the film for their students because of its motivational and inspirational value.

Last week, the Kingston Cricket Club concluded an arrangement for a fund-raising screening of the film later this month when the Indian cricket team, which is now on tour in the Caribbean, arrives in Jamaica.

Fire in Babylon begins with a number of the prominent cricketers giving a short overview of how the West Indies team came to prominence. “We were on a mission — a mission to prove that we were just as good as anyone, equal for that matter. And for me to try and instil some of this belief in others… it wasn’t going to take ordinary individuals to accomplish that. This was a special bunch that felt the same way, had the same special consciousness,” explained former captain Sir Vivian Richards in the documentary.

Leslie explained that the references made to Marley tied into the revolutionary message that Marley, reggae and the West Indies team carried for the Caribbean, Jamaica, Africa and for black people at the time.

Also featured is reggae veteran Bunny Wailer, who is identified more with football than cricket.

“In the West Indies, the greatest cricket is found,” he said. “We, the Caribbean people, have some kind of a knowledge of how to hold the bat or how to bowl the ball. Cricket is something that is a daily situation. We play cricket for the value of cricket.”

Speaking on May 28 at the final night function of the Reggae Film Festival in Kingston, Peter Hargitay of the UK/Switzerland H&H (Hargitay and Hargitay) Pictures in Motion production company, said: “When I got involved in it as a producer … we were first told it’s about cricket. I absolutely don’t know anything about cricket — I prefer football actually — so I went reluctantly to meet Ben Elliott who is another one of the producers and then he told me that, yeah, it’s about cricket but not really. I liked that not really.

Leslie said that Fire in Babylon is scheduled to be released in the Caribbean this month, starting in Barbados, Trinidad and Tobago, then in Jamaica sometime around August.

“We also will be releasing the film on DVD very shortly, so it can be had in gift shops and stores, not only in Jamaica, but the entire Caribbean,” he said.

For the original report go to http://www.jamaicaobserver.com/entertainment/Fire-in-Babylon-scores-big-at-Reggae-Film-Festival_8949024#ixzz1ORWYwlPN