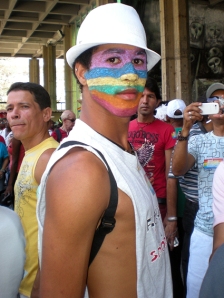 Amrit, writing for Havana Times looks at the profound contradictions behind the deceptive acceptance of homosexuality in Cuba.

A friend once told me this joke: Do you know the definition of a “specialist”?  It’s someone who knows increasingly more about decreasingly less.

And after paying attention to the recent campaign launched in Cuba against homophobia, I admit that I’ve thought a good deal about those words.

As strange as it seems, I wasn’t even surprised by the outburst of official enthusiasm for an issue so largely silenced and still bearing a trace of latent pain (perhaps due to the validity of that pain, the past is silenced with greater energy).

The fact is that Cuba has always been a country of extremes.  That’s why the real problems, the deepest causes, remain unknown between the violent swings of the pendulum.

However I can say — though it sounds extremist — a day against homophobia is like treating cancer with an aspirin.  That doesn’t mean it’s not a commendable attempt, but it’s epidermal, like almost all solutions that don’t aim at a real awakening of consciousness.

I especially thought about this when reading the article by my colleague Irina Echarry, “Cuba Parade Says No to Homophobia,” in which she commented about the parade of gays, lesbians and transsexuals down 23rd Street in the Vedado district.

Irina mentioned the ironic situation where police officers, forced to guard those who they harass the rest of the year, murmured derisive comments among themselves about what they really don’t accept, or don’t understand.

It occurred to me that this was not strange, not only for the implicit taboos or the fact that no campaign can overturn such thinking, but because tolerance cannot be imposed; it is born from the same respect that each human being receives from their childhood.

Each one of us feels disrespected in some way, and in this sense the sudden “task” of accepting homosexuals is neither spontaneous nor reciprocal.

One day for true inclusion

In the exercise of removing layers and layers to see deeper within, I wound up wondering: Why only one day against homophobia?

If one day was established to promote and ennoble freedom of thought, sexual diversity would be included, but there would also be reasons to mark all forms of discrimination that have been suffered (or is suffered) issuing from creed or ideology.  But I imagine that no homosexual, not even on that jubilant day for inclusion and tolerance, can openly express a political opinion different from the official one.

Moreover, if someone took that initiative and was repressed, I can predict that almost none of the other homosexuals who were celebrating their “day of freedom” would defend them.  This is logical, because it would cause them to lose the respite that they’re enjoying for the first time in many years…

Some will counter — upset — saying: “Well, something is better than nothing.”  But unfortunately that “something” distracts us from a real victory when we’re only manufacturing another island to separate others.

In 2009, with the help of my husband and the invaluable support of a group of friends, we celebrated the International Non-violence Day (which coincides with the birthday of Gandhi, the leader of Indian independence) at the Plaza Area Cultural Center.  It was then that I came to understand how many disguised forms of violence exist in society.

Performing there was “Danza Voluminosa,” a group of obese women whose dancing challenges the conventional aesthetic canon that we also suffer.  Also featured was “El Trencito,” a program created by a couple who work with children and promote non-competitive games.  They made the point that this is something we don’t think about enough, even though competition is an evil that’s imposed on all of us from a very early age, atrophying our natural inclination for cooperation and unity.

Likewise there were presentations on Gandhi, the vision of non-violence of Hatha Yoga and perspectives of Russian philosophers…

Seeing the public’s grateful reaction, the atmosphere of love that the event generated, and people’s expressions, we understood that this is an issue of great urgency.  We thought about how many issues could be included in the Day of Non-violence: those of sexual and racial discrimination, domestic violence, the abominable conditions of street animals in Cuba that suffer starvation and other illnesses in our own sight, religious initiatives that practice in an ecumenical sense… I understood how inclusion grows, from within and on up.

Last year however, for personnel reasons we begin the organization of the event with little lead time, making it impossible for us to secure the appropriate facility.  The inevitable response was that any initiative must be proposed with a considerable margin of time so that it can be reviewed and approved.

We were completely disappointed when October 2 came and we didn’t hear any announcement about the activities on the radio or television.  In that day’s edition of the Granma newspaper, which I still have, there was not the least mention of the celebration of International Non-violence Day, and in the section on the last page, dedicated to anniversaries, the birthday of Mahatma Gandhi didn’t even appear.

The limit of “specialness”

General indifference made me understand, once again, how uninterested we are about the deepest problems.  Like with my friend’s joke, we miss out on the chance for inclusion by instead looking for sophisticated labels for aspects separated from our problems.

I cannot help remembering a letter by Antoine de Saint Exupery that was sent to his friend Leon Werth (to whom he dedicated his famous book The Little Prince).  In the note, of which I can barely remember the exact words, the writer and pilot reflected on what it means to be “brave” in the conventional sense, as undertaking rather violent actions stimulated by vanity and a “pleasant sporting-like emotion.”

“I will never again admire anyone who isn’t more than brave,” Exupery wrote.

If we look closely, like the fox at his work, we will realize how much ego and longing for leadership has corrupted many of our most sincere and altruistic battles.

Every time I talk with some enthusiastic defender of the struggle against racial discrimination, I realize that the key idea is confrontation against the white empire that subjugated them.  And where there were also (and are) people avid to promote thinking that is truly free of racism, I’ve seen and felt how easy it is to place oneself on the other extreme of the battle field with the same rage, void of nobility.

Within feminism, the common position is equally belligerent and excluding.  And in all those causes that hide behind being “anti,” this same preposition separates them from of the opposite, preventing consensus.

While we’re satisfied with parts of the whole, like in the parable of the blind men touching an elephant and each one assuring that the part they touched was reality, we will only be kneading the shell of freedom.

But in addition, no external authority, no institution or law, no official or special day can grant us any freedom, because freedom is born with the desire for understanding, it includes sensitivity as another form of intelligence, and it is a dimension of consciousness.

For the original report go to http://www.havanatimes.org/?p=44556