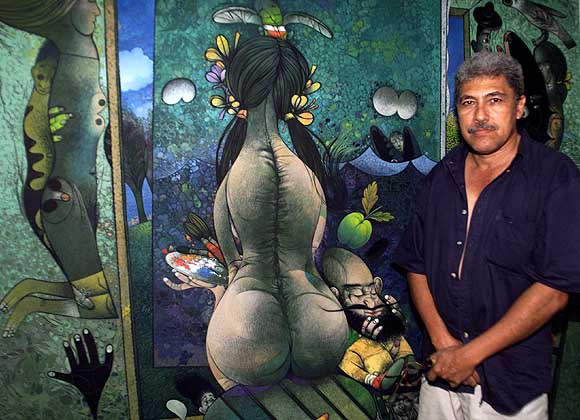 Yoani Sánchez reports for the Huffington Post on the closing of painter Pedro Pablo Oliva’s art center in retaliation for his suggestions to enhance democracy in Cuba.

We are experiencing another turn of the screw of intolerance. Just when individual daring is gaining ground here and there, the times of admonishment come along. The first signs appeared with the TV serial called Cuba’s Reasons, whose script seems to have been written in Stalin’s Russia rather than on this 21st century Caribbean island. Then came the “rapid repudiation rallies,” increased police operations, monitoring cellphones in real time, detentions and searches. All this while the official press continues to say that “the improvement of the economic model” is well underway and that the Cuban Communist Party’s Sixth Congress “has been a resounding success.” We, meanwhile, face the shock of the correctives; no boldness is left without its everlasting punishment.

Among the lashes applied by Daddy State this time, is the closure of the cultural center run by the painter Pedro Pablo Oliva, located in the city of Pinar del Rio. Urgently called before the local authorities, this artist, winner of the National Arts Award, fell under a barrage of criticisms and reprimands. He was questioned about having declared in an interview that he was in favor of a multi-party system, and about having sent a most cordial letter to this writer to publish in her blog. He was also accused of opening the doors of his house to counterrevolutionaries, and even hobnobbing with diplomats from other countries. He was stripped of his position in the Provincial Assembly of People’s Power and a few hours later a farewell poster appeared in the door of his workshop.

The artists from the Writers and Artists Union of Cuba (UNEAC) have chosen, so far, to remain silent and look the other way. Like the little figures with empty eye sockets and forebodings that take Oliva months to paint on his canvases. I maintain that now is the time to support him, to say, “Relax, your brush will be more free without these ideological ties, without these partisan formalities.” It is also a good occasion for those of us sanctioned by insult, censorship and surveillance to do something. If we haven’t converged in our opinions and proposals for the future, at least we can articulate the pain, drawing closer because the blow received by one is felt by all.

Yoani’s blog, Generation Y, can be read here in English translation.
Translating Cuba is a new compilation blog with Yoani and other Cuban bloggers in English. Yoani’s new book in English, Havana Real, can be ordered here.