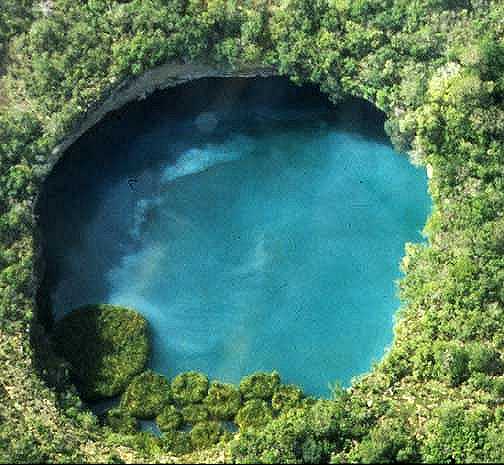 Speaking about the cenotes (underwater caves) of Mexico and Belize, Levinson Wood explores the beauty of inland diving in some of the world’s most beautiful spots:

“You don’t actually need any specialist qualifications, other than the PADI open water certificate,” says Aaron, the local divemaster who has been exploring the cenotes of Mexico’s easternmost region for over fifteen years, “the most important thing is a sense of adventure.”

That’s putting it lightly thinks I, as we climb down a rusty set of ladders some twenty metres down a natural bore hole in the middle of the jungle, an hour’s drive from the nearest town.

Cenotes are a natural phenomenon unique to this part of Mexico and neighbouring Belize, a result of the huge meteor that wiped out the dinosaurs 65 million years ago. The whole of the peninsula is dotted with these holes, ranging from cavernous wells to tiny potholes- many of them are linked by an underground network of tunnels. Because of this, there are no natural rivers here and all water flows underground creating a vast undiscovered world below the blooming jungle of the interior.

[. . .] Cenote diving isn’t cave diving in the truest sense (for which you need specialist certification and nerves of steel), because when you get below the small entry points they actually open up into immense cathedral-like caverns where it is almost impossible to get lost. Aaron leads the way, following a pre-placed line to the bottom of the cave and I am surprised to see fish and even a turtle swim gracefully by.

The cenotes were seen by the ancient Mayan civilisation, which flourished in Central America until the coming of the Spanish in the sixteenth century, as gateways to the afterlife. Many of the caves were then dry and became used as burial chambers and places where human and animal sacrifices took place. Since the conquistadors effectively ended many of the traditional practices and Christianity took hold, the cenotes were left to disappear into the jungle and were forgotten about for several hundred years.

[. . .] Even now only a handful of the cenotes have ever been dived and there are still over 3,000 left undiscovered. Aaron hopes to enable more visitors to experience what he has seen and is one of only a couple of qualified diving guides that operate in the region.

As we slowly ascend toward the moon-like circle of light above I feel a tremendous sense of tranquility, but also real privilege to have been able to explore this fascinating underground world. It only felt like we were under water for five minutes but Aaron smiles and shows me his watch and I am stunned to realize that we have actually been submerged for over half an hour. “It’s the magic of the Maya,” he chuckles as we climb out into the emerald lushness of the Mexican Jungle.

[Levison Wood founded the pioneering expeditionary service Secret Compass which specialises in taking clients to the world’s most remote and undiscovered destinations. He is leading a one-off dive trip to explore the cenotes of the Yucatan in September.]

2 thoughts on “Subterranean Scuba in Caves of Belize and Mexico”