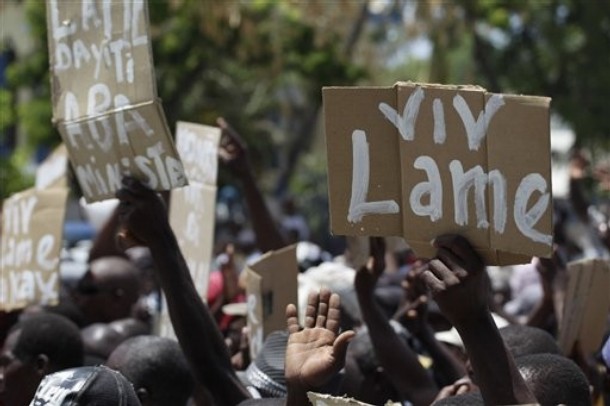 On the campaign trail, Haitian president-elect Michel Martelly pledged to reconstitute Haiti’s Armed Forces. Ostensibly, they will provide territorial defense, public security in rural areas, and first responders in case of natural disasters. Well and good. But an army, with all the historical baggage it suggests in Haiti, is not the answer, argues Johanna Mendelson Forman for the Miami Herald.

During the Duvalier family dictatorship and the wreckage that followed, Haiti’s armed forces became synonymous with impunity and human-rights abuse. After Jean-Bertrand Aristide was reinstalled as president in 1994, plans were laid to demobilize the army.

By early 1995 the process was under way. The United Nations began collecting arms and the U.S. Agency for International Development (USAID) and the Department of Defense funded a program that gave Haiti’s soldiers the option to voluntarily demobilize. USAID’s Office of Transition Initiatives supported the soldier-to-civilian reintegration through vocational training programs that offered a new start and a career.

But jobs proved elusive; the country’s unofficial unemployment rate was well over 60 percent. A few with adequate skills quickly realized that it was easier to find a job working as private security guard than just about anything else. Those who could not find work fled across the border to the Dominican Republic or turned to crime to make ends meet.

Since the demobilization, Haiti’s government has twice tried to organize a national police. The first effort, begun during the U.N. peace operations in 1994, disintegrated in 2000 when Aristide politicized the new police force. In the wake of Aristide’s sudden resignation and departure in 2004, the U.N. launched a second attempt.

Today, in spite of significant progress in rebuilding a national police force, Haiti remains the Wild West. Hurricanes ravaged parts of the country in 2008, and a major earthquake destroyed Port-au-Prince in 2010. The aftereffects continue to disrupt public life, reconstruction and, most important, the establishment of effective public security.

So it comes as no surprise that many of president-elect Martelly’s supporters nod in approval when he calls for the army’s return — but it’s not what Haiti needs.

Martelly rightly acknowledges the need for a professional corps to guarantee safety in rural areas; protect the border and the coastline; and act as first responder in a country prone to natural disasters. But these functions are better served by a different kind of force.

An army’s role is to defend against external enemies. But Haiti has none. Haiti faces internal and transnational threats that a gendarmerie or territorial civil defense force would more appropriately address. Such a force would serve as both police and national guard, covering the otherwise lawless areas outside of Port-au-Prince and preparing Haiti for the types of security challenges it will face in the future.

Back in 1994 when plans were made to demobilize the army, former Costa Rican President Oscar Arias recommended that Haiti create a municipal and rural guard, similar to Costa Rica’s national police. That nation abolished its army in 1948, establishing a Ministry of Public Security to handle Costa Rica’s policing and civil defense needs. It has remained a remarkable success.

Sadly, such a force was never created in Haiti, mostly because of budgetary constraints; Haiti continues to pay the price.

Today, financial conditions are no better. The cost of the U.N. Peace Operation in Haiti runs to $764 million, with a request for over $800 million next year. This burden, currently shouldered by the international community, is not sustainable.

Costs will matter, but no gendarmerie will be as expensive as a peace operation. If Martelly is serious about his plan to increase revenues through new forms of taxation, such as his proposed levy on incoming cellphone calls, then perhaps the foundations for a new Haiti will finally make security a top priority.

President-elect Martelly is onto something about the tension between security and sovereignty. But given Haiti’s turbulent past, he should be careful about terminology and models. His government should convene a group of leaders like President Ricardo Martinelli of Panama and former President Arias of Costa Rica — both from nations that have disbanded their armies — to help create a security apparatus that protects, serves, and defends Haitians while preserving sovereignty for the citizens.

Johanna Mendelson Forman is a senior associate with the Americas Program at the Center for Strategic and International Studies. In 1994 she worked in the demobilization program in Haiti.