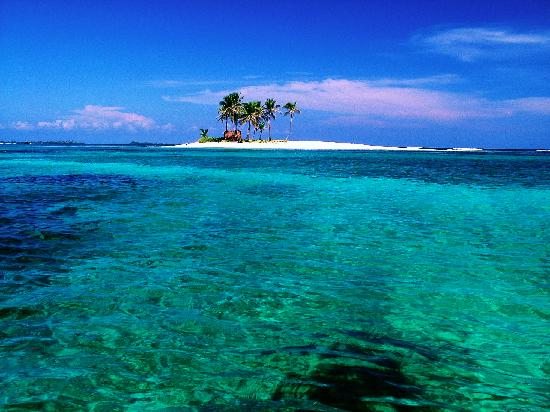 The United Nations Convention on the Law of the Sea (UNCLOS), says that any country can claim a 200-nautical mile Exclusive Economic Zone (EEZ) around every island that it controls, usually splitting the differences with the EEZs of other countries that have territories within those limits.

What is an island?

But what exactly constitutes an island? How large does it have to be? UNCLOS is rather vague on this score. It defines an island clearly enough as “a naturally formed area of land, surrounded by water, which is above water at high tide,” but it does not specify a minimum size.

Two sections later, certain “naturally formed areas of land, surrounded by water, which remain above water at high tide,” are removed from the category: “rocks which cannot sustain human habitation or economic life of their own shall have no exclusive economic zone.”

The definitions difficulties here are profound. A mere clump of stone barely extending above the high-tide line obviously does not qualify as an island, but what about a larger rocky mass that could conceivably “sustain human habitation?”

What about a non-rocky island too small, too arid, or too cold to sustain human habitation under normal conditions? What if those conditions were modified by human engineering? Such questions are not answered, leading to inherent ambiguity and numerous diplomatic disagreements.

Consider Aves Island, a speck of sand in the central Caribbean, 1,230 feet (375 meters) by 160 feet (50 meters), that supports a few scrubby bushes. That, at any rate, is the current extent of the island; storm surges occasionally submerge the entire islet, changing its size and rearranging its topography.

Venezuela currently controls Aves, and claims that it is an island, potentially giving it a sizable extension of its EEZ in the central Caribbean Sea. Since 1978, Venezuela has maintained a permanently staffed scientific station on Aves built on large pilings and protected by a small naval contingent. As a result, the island might be said to sustain human habitation, but it certainly does not do so on the basis of its own resources.

The Venezuelan position has been challenged by several parties. The United Nations considers Aves a mere rock, denying Venezuela an EEZ in the vicinity. Until recently, Dominica also claimed Aves, with support from the Caribbean Community (CARICOM). In 2005, a group of eastern Caribbean countries denounced the Venezuelan claim to the waters around Aves.

Venezuela’s vice president José Vicente Rangel responded by asserting that, “Venezuela has been exercising sovereignty since about 1800. I think that the empire’s long arm is involved in this mobilization around Aves Island.” (“The empire,” in Venezuelan diplomatic code, refers to the United States.)

Rangel’s historical assertion is questionable, as American guano collectors occupied the island periodically in the late 1800s and early 1900s. The United States, however, subsequently dropped all claims to the islet, and in 1978 acknowledged Venezuelan control over both Aves and its marine environs, as specified in the United States-Venezuela Maritime Boundary Treaty. The treaty sets the maritime division between the two countries halfway between Aves and the U.S. Virgin Islands.

The Venezuelan position was further solidified in 2006 when Dominica dropped its claims. Dominica, not coincidently, soon afterward joined the ALBA alliance, and as such now receives Venezuelan subsidies. Venezuela’s position, however, is complicated by the fact that it has not signed the United Nations Convention on the Law of the Sea. As such, its claims to an EEZ around Aves have not been formalized. (The United States has signed the convention, but has never ratified it; the U.S. does, however, honor “almost all the provisions of the treaty.”)

Aves Island – or non-rocky rock, as the case may be – is not the only site of a territorial dispute in the Caribbean. Navassa Island, between Haiti and Jamaica, is occupied by the United States but constitutionally claimed by Haiti. Covering two square miles (5.2 square kilometers), it is a veritable giant compared to Aves. Navassa is currently administered by the U.S. Fish and Wildlife Service as a National Wildlife Refuge. A more complex dispute involves a number of tiny islets and sand bars in the western Caribbean.

Nicaragua also claims the vastly larger and well-inhabited – and historically English-speaking – Colombian archipelago of San Andrés and Providencia. In 2007, the International Court of Justice recognized “the full sovereignty of Colombia over the islands of San Andrés [and] Providencia…, but left open the question about the demarcation of the maritime boundary… .”

A number of additional maritime boundaries remain in contention across the Caribbean. On February 24, 2011, for example, the Minister of Tourism and International Transport of St. Kitts and Nevis, “informed the Cabinet that [the country] has overlapping or disputed maritime boundaries with the Netherlands Antilles (St. Eustatius), Venezuela, The French Antilles (St. Barthelemy), Antigua and Barbuda, and Montserrat (effectively, the United Kingdom).” When it comes to sea-space dotted with tiny islands, geopolitical boundaries can be extraordinarily difficult to establish.

St. Kitts and Nevis may have an especially hard time demarcating a firm maritime border with “the Netherlands Antilles,” seeing as a geopolitical entity of that name no longer exists.

*Martin Lewis is Professor of Geography at Stanford University

For the original report go to http://www.rnw.nl/international-justice/article/when-island-not-island-caribbean-maritime-disputes