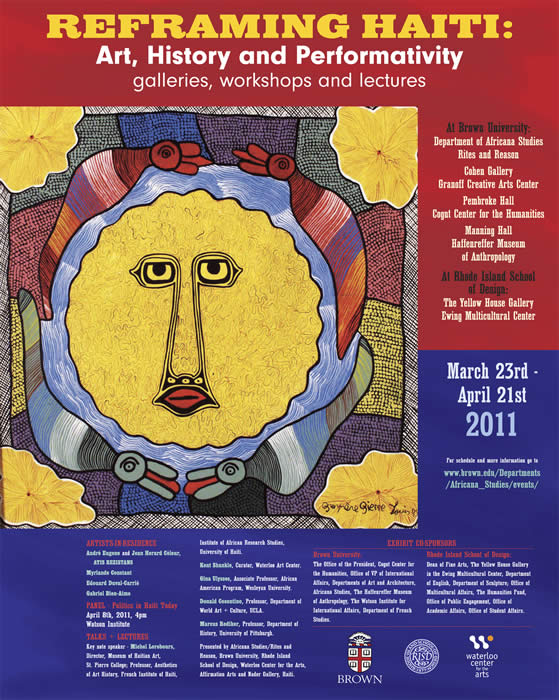 Brown, RISD exhibit offers hopeful perspective of strife-ridden country, Cate McQuaid writes in the Boston Globe. Here are some excerpts, with a link to the full article below.

When Americans think of Haiti, the images tend to be of strife: the disastrous 2010 earthquake, a history of political unrest, terrible poverty. “Reframing Haiti: Art, History, and Performativity’’ is a monthlong celebration of Haitian culture staged by Brown University and the Rhode Island School of Design that seeks to correct that impression. “Reframing Haiti’’ offers undeniably vital, proud, even joyful works of art in five venues on both campuses, and a series of talks and workshops through April 21.

Duval-Carrié’s large-scale paintings on aluminum burst off the wall of Brown’s Pembroke Hall, bustling with pattern, landscape, sparkle, and mythos rooted in Haitian Vodou, what Americans think of as voodoo, a syncretic religion that blends elements of European Catholicism with African religions brought to Haiti in slave ships. Duval-Carrié often wraps his paintings around Vodou spirits, such as Erzulie and Lasiren, who represent aspects of femininity.

In “Her Saving Grace, La Sirene,’’ the central figure — which is the same spirit as Lasiren; Vodou is largely an orally transmitted religion, so spellings often vary — appears in a pattern of sparkling blue drops. She is the voluptuous power of the sea. On land above her, Duval-Carrié has painted the crumbling edifice of a building toppled by the earthquake.

The four-panel piece, “Paysage Argenté,’’ is a dense, shimmering re-creation in silver on black of the flora and fauna of Haiti in a gorgeously composed landscape. The whispers of silver over black hint that starlight has coalesced into form; that would make this Haitian scene a version of the Garden of Eden.

“Flags of the Spirits,’’ a spectacular installation of flags usually made to hang in temples, is up in Brown’s Rites and Reason Theatre, a black box, and lit with the verve of a high-energy musical.

In Vodou, a distant god oversees the world, but his spiritual emissaries do all the hands-on work. This show taps some of Haiti’s best flag makers. Myrlande Constant’s striking “Baron Samdi Negre Rada,’’ portrays Baron Samdi or Samedi, a spirit known as the lord of death. He dances in a fancy white suit through a cemetery, over a gold-spangled ground; his trademark skull perches on a grave marker behind him.

Roudy Azor’s flag, “12 Jan. 2010,’’ depicts the quake: A man, or spirit, in a black suit glittering with purple tumbles out of the sky as others huddle beneath; buildings in the background topple like a house of cards. The sheer color and sparkle of these flags helps to integrate their dark content in a belief system that embraces death, rebirth, and rejuvenation.

More Vodou art is on view at the Haffenreffer Museum of Anthropology at Brown, where Boston-based Vodou priestess Marie Evans has set up an ebullient altar dedicated to Lasiren, overflowing with ritual objects, including bead-bedecked bottles, a blue-spangled cloth covered with shells, a mermaid statue holding a glass globe, and a broom.

Haitian history pervades its art as much as Vodou does. On the floor above Duval-Carrié’s show at Pembroke Hall, a small exhibit is devoted to 20th- and 21st-century artists interpreting the Haitian Revolution, which followed a slave revolt in 1791. Images such as Rony Deetgen’s “Heroes of the Independence’’ portray seminal figures such as Toussaint L’Ouverture, here in conference with his generals in an ornate room. He points out the door; in the distance the blue and red Haitian flag flies. Under French colonial rule, the flag had been France’s tricolor; the liberated Haitians symbolically removed the white.

These paintings, and those arranged salon-style in the Cohen Gallery at Brown’s new Perry and Marty Granoff Center for the Creative Arts, are dominated by a style particular to Haitian art. Spaces are foreshortened, figures are flat and stylized. I wonder if this has its origins, in part, in the textile portrayals on the Vodou flags. The result is bright and cartoony. This jampacked exhibit, much of it borrowed from the Waterloo Center for the Arts in Iowa, should have been edited down.

But some of Haiti’s most renowned artists have work here. There’s Hector Hyppolite’s “Erzulie et ses soeurs,’’ in which the spirit of love and her sisters sit amid resplendent bouquets of delicately rendered flowers. Hippolyte worked in the first half of the 20th century, and his Vodou-inspired scenes became a favorite of the Surrealists.

Then there’s contemporary artist Frantz Zephirin, whose depiction of Baron Samedi graced the cover of the New Yorker after the earthquake. His brash, antic painting “The Dictatorship by International Money’’ is a fantastical, nightmarish scene of an island scattered with paper currency. Handcuffed figures with human bodies and vividly patterned animal heads trudge into the water. On land, a man in a pirate hat tragically brands Lasiren with a dollar sign.

The final element of “Reframing Haiti,’’ a succinct exhibit of sculptures made by Haitian metal workers from old oil drums, is up at RISD’s Ewing Multicultural Center Gallery. No spangles or bright colors here, but these sculptors make up for their dark materials with tensile gesture and a lyrical rhythm to their composition.

“Reframing Haiti’’ gushes with eye-catching imagery and narrative, but despite a brochure and wall text, much useful context is missing. A detailed explanation of Haitian iconography would go a long way in tying these exhibits together, and more deeply rooting them in Haitian cosmology.

For the original review go to http://www.boston.com/ae/theater_arts/articles/2011/04/16/exhibit_celebrates_a_proud_and_joyful_haiti/