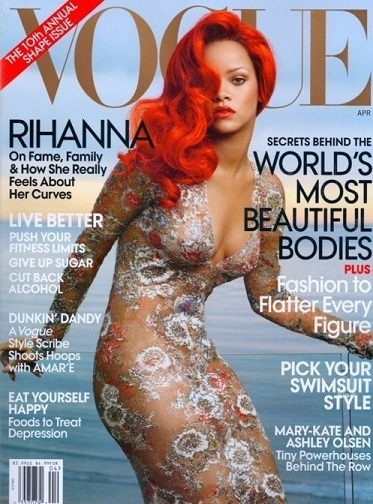 In the magazine, she opens up about her changing style, which has evolved from generic pop star to flame-haired pop icon. She admits that even before her chart-topping days, she always wanted to stand out from the crowd. “When I was fourteen and first started going out, I always wanted to be the opposite of everyone else,” she explained in the interview.  “So I would go to the club in a polo T-shirt and pants and sneakers and a hat on backward, just so I would not be dressed like other girls. And I got desperate for things that weren’t available in Barbados. I would cut things out of magazines. I was obsessed with creating a visual with clothing, and the way things are combined.”

Rihanna added that even now, like then, it’s always about taking it to the next level when it comes to the visual component of her persona. “It’s become more about taking a risk. When I am putting looks together, I dare myself to make something work. I always look for the most interesting silhouette or something that’s a little off, but I have to figure it out. I have to make it me. I think that’s the thrill in fashion.”  The first big step came when she made the transition with her hair, going from soft, standard pop styling to the now-infamous choppy, short ‘do she rocked in the “Umbrella” video. She said, “When I cut my hair, the whole sound changed, my style changed.”

Given that she appears in the “shape issue”, Rihanna also talked about her famous va-va-voom figure, admitting she only recently began to appreciate it. “Over the holidays and even during filming [Battleship], I realised that I actually like my body, even if it’s not perfect according to the book. I just feel sexy. For the first time, I don’t want to get rid of the curves. I just want to tone it up,” she said. “My body is comfortable, and it’s not unhealthy, so I’m going to rock with it.”