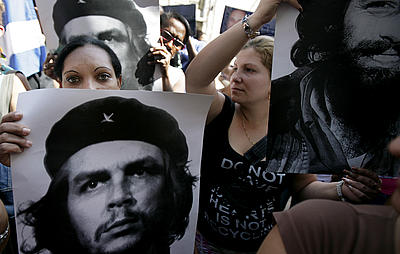 Timothy Guy of Press-Enterprise (see link below) looks at the impact of Alex Korda’s photo of Che Guevara, on exhibit at Riverside, California.

To this day, more than 40 years after his death, Che Guevara is still the face of new revolutions.

And it’s all thanks to a photo.

Artist Alberto Korda took a photo of Guevara in 1960 and it has become an icon to many.

Protestors from around the world, including recent events in the Middle East, hold up variations of the photo as a symbol of rebellion.

“Che! Redux,” an exhibit featuring photographs, posters, banners and artifacts on Guevara, will be held at UC Riverside’s Barbara and Art Culver Center of the Arts starting Saturday through May 7.

This is not the first time the exhibit has been to Riverside. It had its premiere at the UCR/California Museum in 2005. It has since been to 10 venues in seven countries around the world such as Italy, Turkey, Mexico and Portugal.

The exhibit was organized by Jonathan Green, executive director of UCR ARTSblock, and curator Trisha Ziff.

There will be an opening reception for the exhibit April 16 from 6-9 p.m. and it is free to the public.

UC Riverside’s Barbara and Art Culver Center of the Arts

For the original report go to http://www.inlandsocal.com/iguide/arts_galleries/content/news/stories/PE_News_Local_D_culverche08.1f5e00.html

2 thoughts on “One photograph changed the world”