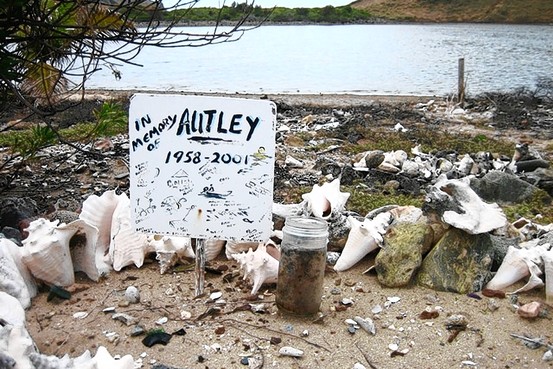 I asked Stefan Carney, our skipper, whether any of his guests had ever requested a trip to Salt Island before? “You’re the first,” he said without thinking twice.

Why Salt Island, in the British Virgin Islands, hasn’t taken off as a tourist resort became obvious as soon as we set foot on the island. Actually even before that, when the rotten-eggs smell from the island’s two salt marshes wafted out to greet out boat.

In its heyday, Salt Island had hundreds of inhabitants who supplied salt to ships. Today, abandoned buildings and conchshell memorials mark the island.

One might wonder what we were doing there in the first place, since there are far more geologically charmed islands in the Caribbean, some of them boasting white sand beaches, fine restaurants, Ralph Lauren outlets and celebrity sightings.

It began over a decade ago when we visited Anegada, another of the less traveled British Virgin Islands, though more so than Salt Island. While most of the BVI is mountainous, Anegada never rises more than 28 feet above sea level and has only 200 residents. One of those at the time we visited in the mid-’90s was a woman named Pam who owned a bakery on the waterfront. In addition to baked goods and jams and chutneys in decorative jars, Pam sold salt from the salt pond behind the bakery.

I can’t prove scientifically that Anegada pond salt is the best salt in the world, or even that it tastes better than Morton’s. All I know is that my food—especially steak and grilled vegetables—seemed to come alive, to taste richer, with a pinch of the sea, when I sprinkled some on. Indeed, so smitten was our family we brought it home for friends, who shared our enthusiasm.

Unfortunately, Pam closed up shop shortly after that and my understanding was that she moved to the States (even though I’m told her daughter has reopened the bakery). Her husband stayed behind, however, and we arranged to special order the island’s famous salt from him, though without the herbs Pam peppered it with, or the fancy jars. When Pam’s spouse, whose name I’m not sure I ever learned, dropped a shipment off at some dock late one evening, so intense was our anticipation it felt as if we were scoring a controlled substance.

But our supply eventually dwindled and it wasn’t until a couple of years ago when we visited the local Riteway supermarket on Tortola—the island where we’ve been coming since the late ’70s—that we spotted the fluffy, white stuff by the meat counter in unadorned plastic containers, and with the words “local salt” scribbled in magic marker.

Could this possibly have been the long lost salt of Anegada? The woman behind the counter told me it came from Salt Island, which I’d never heard of, and not much else. Tortolans, while friendly and hospitable, aren’t the most communicative of cultures, at least with tourists, so I was forced to do some research on my own—especially since my wife had the bright idea that we’d go out to Salt Island with a shovel (or better yet have someone else do it for us) package it in pretty containers just like Pam once did (how much different could it be from Anegada’s sodium just a few nautical miles away?) strike a deal with Macy’s or William Sonoma, and secure our family’s future.

Salt Island is best known for the wreck of the RMS Rhone, the pride of the British fleet, that went down in a late season hurricane in 1867, killing most of its crew. But through tragedy has come one of the Caribbean’s most popular dive sites—not that I got the impression many divers make it to shore. Aside from the smell and the salt marshes, it’s mostly ruins, one of which a resident rooster and hen have turned into an outhouse, and graves, decorated with coral and conch shells, of some of the hundred or so people who lived on the island in its heyday—when salt was used on ships as a preservative in the days before refrigeration. The last of them, Norwell Durant, died in 2004. Indeed, the island, a British territory, still pays a symbolic rent to the Queen of England of one pound of salt a year.

But how did they harvest it? I had no illusions that there would be gleaming mountains of the stuff when we docked, free for the taking. I knew from speaking with Pam’s husband that there is some sort of harvesting and sun-drying process required. But in my mind’s eye, we’d be able to scoop enough of the crystalline nuggets from the water’s edge, certainly to keep us in seasoning for several years. We’d even brought along a Tupperware container.

But if there was any salt it was hiding in the odoriferous gray and fly-speckled sludge, into which my shoes were now sinking. Extracting diamonds or panning for gold couldn’t have been any harder. It immediately became obvious to me, and probably to my wife, that there was better money in journalism or PR.

The wreck of the Rhone, which we snorkeled afterwards just off shore, was far more amenable, as were the caves on Norman Island, teeming with sea life and coral in eye-popping hues of purple and orange. The island is thought to be the setting for Robert Lewis Stevenson’s “Treasure Island.”

Apart from sun and the beach, snorkeling is what draws me back to the Caribbean. I realize it’s not the most macho sport. The difference between snorkeling and scuba diving is somewhat akin to the difference between cross-country and downhill skiing. The latter has more thrills, but there seems a greater degree of self-determination, of engagement with nature, when infrastructure, fees and fuss are kept to a minimum. Returning to coral reefs I’ve visited over the decades is like coming home. The challenge, obviously, is spotting something you’ve never seen before, the bigger the better. (That’s where you regain your macho cred.) On this occasion I spotted a manta ray in shallow water at Cane Garden Bay, where I’ve seen sharks before. It was huge, though how huge was hard to tell because I never saw it face on. However, its stingerlike tail alone was 8 to 10 feet long. It circled me once, beat its great wings, and vanished into the ocean gloom.

In the end we did manage to acquire some “Salt Island” sea salt at $8.50 a jar from Sunny Caribbee, a local spice company. The cashier assured me that it came from Salt Island, just like it said on the label, but I remain skeptical. I don’t know how anything that white could come from mud whose odor still lingers on my sneakers.