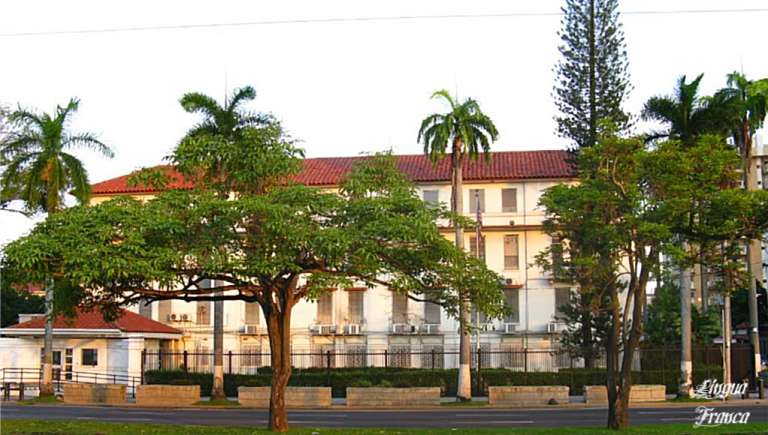 There was a time when graffiti on the walls of the old lady of Balboa, the former U.S. Embassy, would have been an act of desecration. This weekend it became a symbol of preservation, as Newsroom Panama reports.

Fifteen Panamanian activists who painted the walls and fences and planted Panamanian flags were there not to desecrate the building, but to try to save it for its historical importance, and to add to the cultural identity of the city.

The building is soon to be torn down in the name of progress and it will be replaced with a 70 story concrete, steel and glass monument to government bureaucracy: the Financial Tower. Urgings by architects and engineers to preserve the building for any one of a multitude of uses, from an annex for the adjacent overcrowded Santo Tomás Hospital, to a home for NGOs. And lately as a museum, sadly lacking in the country’s capital.

All has fallen on deaf ears, even though those worried about increasing government debt because of massive expenditure on needed infrastructures have pointed out that there is no need for spending of millions of dollars for government offices in  a prime residential location.

For the original report go to http://www.newsroompanama.com/panama/2580-graffiti-for-the-preservation-of-panamas-history.html

The photograph above, by Omar Upegui R., was part of the report on the fate of the building that can be found at http://epiac1216.wordpress.com/2009/09/01/the-former-american-embassy-building-in-panama/