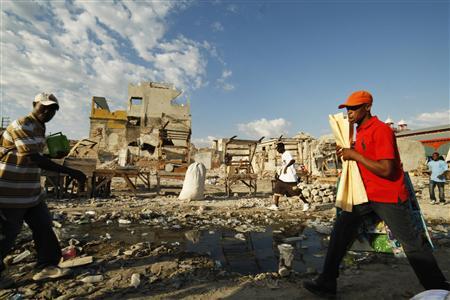 Haitians traumatized by a big earthquake last year have watched Japan’s disaster with a mixture of sympathy and horror, Reuters reports. Experts say the poor Caribbean state could be hit anytime by a similar tsunami.

Most at risk from tsunamis is Haiti’s north coast and second city of Cap-Haitien, because fault lines criss-crossing the north of the island of Hispaniola jut into the sea, according to the country’s top seismologist, Claude Prepetit.

“A tsunami can occur in Cap-Haitien today, or in several decades,” said Prepetit, who had warned Haitian authorities of the country’s high vulnerability to earthquakes a year before the magnitude 7.0 quake struck on January 12, 2010.

It devastated the overcrowded capital Port-au-Prince and killed more than 300,000 people, as poorly constructed and poorly located buildings and homes collapsed like cards.

Scientists have since discovered that the Haitian quake also caused landslides above and below water, triggering tsunamis that washed ashore onto sparsely populated coastal areas of the country, killing at least three people.

Prepetit said seeing the destruction inflicted by the March 11 9.0 magnitude quake and ensuing tsunami on the northeast of Japan, one of the world’s wealthiest nations which also has among the best developed disaster-response plans, was a sobering warning for Haiti’s impoverished population.

“People here were shocked to watch on TV cars, trucks, boats floating or being thrown like toys by the giant waves of the tsunamis,” Prepeti told Reuters late on Wednesday.

Haiti’s biggest cities, Port-au-Prince and Cap-Haitien, are on the coast. In 1942, Cap-Haitien and Port-de-Paix were hit by a tsunami that triggered waves 16 feet high.

“Japan’s disaster should teach Haitian government authorities how to prepare for a tsunami. There should be an awareness campaign … especially here in the north,” said Monique Bastien, 28, a Cap-Haitien resident.

“I wonder what would be left of Cap-Haitien if we had had to face a tsunami like the one that hit Japan,” said Eddy Marion, 37, a school teacher in the north coast city.

But the threat faced by Japan from damaged nuclear reactors means little to Haitians, where much of the capital and most of the country lack electricity due to chronic power shortages.

Haitians also ruefully compare the discipline and organization displayed by Japan’s government and rescue and recovery services with the slow-moving and sometimes confused reconstruction operation in their own undeveloped country.

Despite a huge outpouring of global sympathy and multi-billion-dollar aid pledges from foreign donors, many of Port-au-Prince’s earthquake-scarred streets are still littered with rubble and hundreds of thousands of quake homeless still live crammed into squalid tent and tarpaulin camps.

“Japan’s government will rapidly take appropriate measures to assist the victims,” said Jonas Jeune, 25, a student. “But I bet our victims here will still be under tents the same time next year. I think we should do better,” he added.

Haiti’s government, which lost some 30 percent of its civil servants in the quake, has traded blame for the slow recovery with foreign donors and NGOs, which say the government is weak and lacks firm leadership. The government says the international community has been slow to deliver funds.

For the original report go to http://ca.reuters.com/article/topNews/idCATRE72N7LR20110324?sp=true