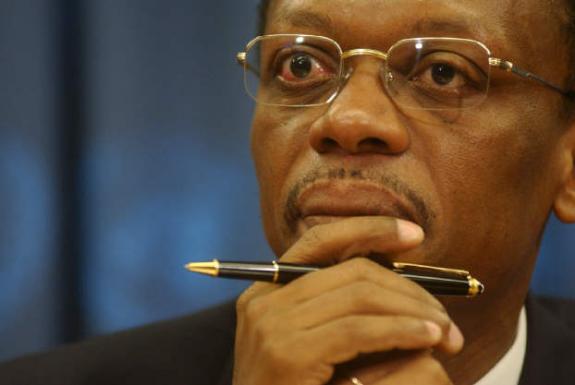 Former president Jean-Bertrand Aristide is expected to return to Haiti as early as Friday, says the Miami Herald. See excerpts with a link to the full article below:

Throughout the quake-ravaged capital, not far from the teeming slums and public plazas-turned-homeless encampments, newly erected green and white welcome home banners read: “Our mother is here already, our father is coming. We all agree.” The “father” refers to the pending arrival of former President Jean-Bertrand Aristide, who is expected to return from South Africa on Friday — or as early as Thursday — despite diplomatic attempts to keep him away until after Sunday’s critical presidential and legislative runoff elections.The fluttering green and white banners — in which the word “mother” refers to presidential candidate Mirlande Manigat — shows to what extent candidates in Haiti’s historic elections are willing to go to court Aristide’s supporters, but also how relevant he remains even after seven years in exile.

“The fact that the international community fears that the mere presence of Aristide could destabilize the whole game of cards shows that it has little confidence in the solidity of Haiti’s political system,’’ said Robert Fatton, a Haiti expert at the University of Virginia. “However, I would be more anxious about the post-electoral period than the elections themselves.’’

On Wednesday, South African’s Caribbean representative Mathu Joyini arrived in Port-au-Prince as part of the welcoming committee that is expected to include supporters from Miami and members of the Congressional Black Caucus. Also arriving was Aristide’s longtime eye specialist who flew from Miami, presumably to see his former patient who said that he needs to leave South Africa for medical reasons because he was “six years in eye surgery six times.”

Now, as an anxious nation awaits the return of its most well-known and polarizing political figure, supporters and opponents debate the potential impact of Aristide on the most important vote in a generation and Haiti’s fragile political stability. “While Aristide’s return may be a destabilizing force in the political environment, it is an opportunity to further test the judicial system, to address the rule of law, to confront painful issues that we frequently choose to avoid,’’ said Michel Eric Gaillard, a Port-au-Prince-based analyst. “This is a good test for democracy.”

[. . .] Aristide, 57, arrives with no guarantees from Haiti, says the Haitian government and others privy to the planning of his trip. His request for 60 armed police officers was turned down. Under a law passed in his absence, former presidents are only entitled to five years of state-sponsored protection. [. . .] Earlier this week, both Manigat and presidential rival Michel Martelly, a singer known as “Sweet Micky,” dismissed fears over his return. They each welcomed him back, with Martelly saying he will have no influence on the outcome of Sunday’s balloting.