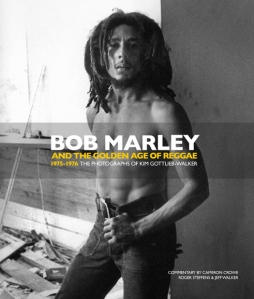 Terri Schlichenmeyer reviews Bob Marley and the Golden Age of Reggae 1975-1976: The Photographs of Kim Gottlieb-Walker, which “drops the feel of summer right into your lap.”

Back in the early 1970s, Kim Gottlieb was an up-and-coming photographer, just starting to make a name for herself when she met Jeff Walker, a music writer working for several California magazines.

Two years later, they were married and Walker was working as a publicist for Island Records. For months, he’d told his friends about a type of music coming out of Jamaica, and it was “the future.” Walker had traveled to the island and spent time with the men behind ska, reggae, and dub, and he took Kim with him to capture publicity stills.

The pictures she took then, portraits of Bob Marley, Peter Tosh, Bunny Wailer, and other musicians, are in this book. Some of them have gone unseen for over 30 years.

Though there is some narrative here, the pictures truly are worth a thousand words. Gottlieb-Walker, says Roger Steffans, has a “keen eye.” Jeff Walker is enthusiastic about her ability to capture “one magical moment after another…” Gottlieb-Walker could put musicians at ease almost instantly, and they trusted her.

These pictures underscore that talent.

Peter Tosh had “the most militant reputation,” and Gottlieb-Walker allows him that. But page through this book and you’ll see a sweet, contemplative, almost gentle side of the outspoken singer.

It was said that Bunny Wailer was an Obeah Man with “powers.” The story goes that interviewers were instructed to “call him” – though Wailer had no phone – so they literally went outside and called to him. The next day, he arrived, ready for an interview. Gottlieb-Walker captured shots of the reclusive and reserved Wailer, who was raised as Bob Marley’s brother.

And then there are the photos of Marley himself: laughing with friends, somber in a magazine pose, singing with his band, dancing on stage, having fun. There are photos of Marley playing with a giant pile of ganja; and shots of him reading, contemplative, in his home.

Even if you don’t read any of the words in “Bob Marley and the Golden Age of Reggae 1975-1976” you’ll still want to page through this album. That’s because the narrative isn’t the focus of author and photographer Gottlieb-Walker’s book.

The pictures of Marley and his contemporaries are, and they’re very memorable.

“Bob Marley and the Golden Age of Reggae 1975-1976” isn’t a book for everybody, and if you’re offended by drugs, you’ll definitely want to pass. But if you love reggae or want a feel for the islands, this book is pretty cool.

“Bob Marley and the Golden Age of Reggae 1975-1976: The Photographs of Kim Gottlieb-Walker” with commentary by Cameron Crowe, Roger Steffens and Jeff Walker
Titan Books, $29.95, 160 pages

For the original review go to http://savannahnow.com/accent/2011-02-27/bookworm-many-sides-marley-come-through-photo-book