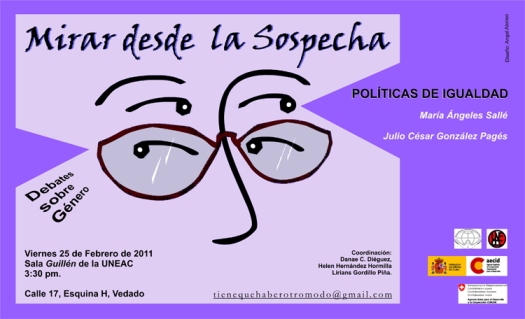 The Union of Writers and Artists of Cuba [Unión de Escritores y Artistas de Cuba, better known as UNEAC] has opened a new monthly space for debate, Mirar desde la sospecha [which can be roughly translated as “gazing from the perspective of doubt or suspicion”]. Mirar desde la sospecha will take place at UNEAC headquarters in Havana every second Thursday of each month, with the participation of artists and researchers, who will lead the debate on topics having to do with audiovisual production, literature, history, and music, among others. The themes will always be linked to gender issues in the fields of art and culture, aiming to address sexism in the representation of women and men, gender-based violence in cultural and artistic products, the treatment of sexual diversity in the media and contemporary art, and related issues. This initiative attempts to trigger thought and awareness through artistic and cultural production, while also promoting a more inclusive artistic canon.

This month’s conversation will center on “Politics of Equality.” The goal is to establish high level dialogue about the processes of gender representation in contemporary Cuban art and culture. The first installment of what promises to be an ongoing event will take place tomorrow, Friday, February 25, 2011, at 3:30pm at the UNEAC’s Guillén Room.

“Politics of Equality” will include the participation of renowned Spanish scholar María Ángeles Sallé Alonso and Cuban historian and researcher Julio César González Pagés. The event coordinators—Danae C. Diéguez, Helen Hernández Hormilla, and Lirians Gordillo Piña—took advantage of the author’s presence in Cuba, where she recently introduced the book Rutas de la emigración española en La Habana, a study of patterns of migration from Spain to Cuba. Sallé holds a degree in sociology from the Complutense University of Madrid and her work focuses on development, on-line social networks, and migration from the perspective of gender equality. She is author of La vía en rosa: Ciberconversaciones de mujeres [The Pink Way: Cyberconversations among Women, 2008].

For original post (in Spanish), see [one of my favorite blogs!] http://negracubanateniaqueser.wordpress.com/2011/02/22/mirar-desde-la-sospecha-nuevo-espacio-de-debate-en-la-uneac/#more-369