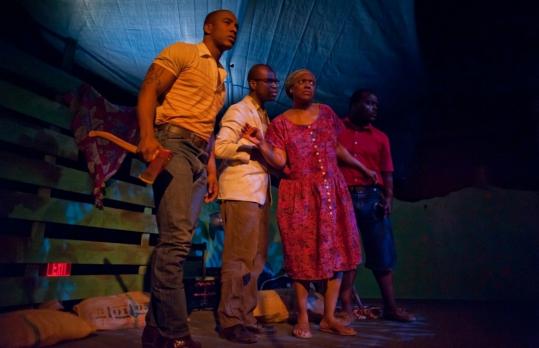 Who doesn’t enjoy a good yarn about outwitting the devil? Cultures all over the world have concocted variations on this theme. For “Ti-Jean & His Brothers,’’ an early work (1957), Pulitzer-anointed poet/playwright Derek Walcott drew on his memories of tales he heard as a child on Saint Lucia.

The play, as revived at Central Square Theater under the joint aegis of Underground Railway Theater and Playwrights’ Theatre at Boston University (Walcott initiated the latter three decades ago), remains as fresh and compelling as ever. Fueled by an irresistible poetry and fully physicalized, this production positively crackles with energy.

Director Megan Sandberg-Zakian and her team envisioned their version as a tribute to the indomitable spirit of Haiti. Musical director/sound designer Kera Washington (founder of the world music ensemble Zili Misik) is onstage throughout, providing Haitian-inflected percussion to accompany songs by the Trinidadian composer André Tanker commissioned by Joseph Papp for the 1972 US premiere in Central Park.

Sara Ossana’s set suggests Haiti, too — especially the raised hut, covered only by a tarp, where Mother (Sonya Raye) looks after her three sons: the strong but stupid eldest, Gros Jean (Hampton Sterling Fluker), a woodsman; the middle child, Mi-Jean (Cedric Lilly), a fisherman only “half as dumb’’ but too caught up in his books to remember ever to bring bait; and the youngest, good-natured Ti-Jean (Kervin George Germain), who has yet to test himself out in the world.

The arrival of one Bolom (Kateryne Nelson-Guerrero), a spookily shrouded “child of the devil’’ bearing a challenge, sends them out to seek their fortune. If any human can make him feel “anger, rage, and human emotion,’’ she promises, the reward will be “a shower of sovereigns . . . fulfillment, wealth, peace.’’

From the opening “Krik? Krak!’’ (“Ready?’’ “Yes!’’ — the traditional Haitian prelude to a spate of storytelling), a chorus of woodland creatures — Frog, Cricket, Bird, and Firefly (Ramona Lisa Alexander, Fedna Jacquet, Kristin Calabria, and Joseph Ahmed) — provide background and running commentary. They also serve as something of a jury, because, in keeping with fairy tales the world over, the way the brothers treat these lowly creatures may well determine their fates.

These actors reappear, variously, as three incarnations of the devil (he’s a notorious shape-shifter), whom each brother will meet later in the journey. The fluidity among roles and players can create some confusion. Still, it’s fun to watch each actor try her or his hand at portraying a wily, cloven-hoofed “Father of the Forest’’ (Papa Bois), a demanding white plantation owner, and — all guises stripped away — the devil himself.

Even the two elder sons, undone by their own anger (the planter has ingenious means of getting their goats) and soon dispatched, return to play the devil. By then you’ll have figured out the structure and be rooting for Ti-Jean — whom Germain endows with wide-eyed bonhomie and a bit of a lisp — to turn the tables.

Amid a very strong ensemble cast, certain actors really seize the stage: Fluker offers glimpses of coiled, calculating malice in his turn as the taskmaster, and Alexander runs away with the show, while wrapping it up, as the final devil, in his cups and cornered.

With his gentle ways and beatific smile, Ti-Jean may make an unlikely revolutionary. But just as his mother foretold, sometimes “plain sense’’ can save the day.