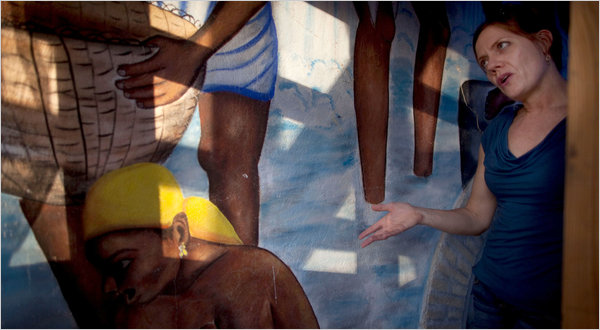 Damien Cave, writing for the New York Times, looks at the restoration of the remaining murals of the Episcopal Trinity Cathedral in Port-au-Prince.

Colorful and sad, beautiful but cracked, the three remaining murals of the Episcopal Trinity Cathedral received the soft afternoon sun after last year’s earthquake only because the rest of the church had collapsed.

Haitians walking by looked heartbroken. All 14 murals had been internationally treasured. Painted in the early 1950s during an artistic renaissance here, they depicted biblical scenes from a proud, local point of view: with Jesus carrying a Haitian flag as he ascended to heaven; and a last supper that, unlike some famous depictions, does not portray Judas with darker skin than the other disciples.

“All of this was painted from a Haitian perspective,” said the Rev. David César, the church’s main priest and its music school director. He marveled at the image miraculously still standing: Judas, with the white beard and wavy white hair often assigned to God himself.

It was his favorite mural, he said, and now, it is being saved.

In a partnership between the Episcopal Church and the Smithsonian, all three surviving murals are being stabilized and carefully taken to a climate-controlled warehouse in Haiti where they will be protected until they can be redisplayed in a new home.

The painstaking 18-month project began in the fall, with conservators analyzing how the paintings were bound to the walls (weak mortar) and the materials that were used to paint them (egg tempera). It was clear that they were fragile. A portion of one painting near the former altar faded to abstraction during the rainy season.

The other collapsed murals seemed to disappear. Perhaps portions were pulverized by the earthquake; perhaps some were stolen. But when conservators and Haitian art students separated the fragments from the rubble, they found only tiny pieces, usually the size of a hand or smaller, that could not be reassembled.

“We have only about 10 percent of the 11 murals that fell,” said Stephanie Hornbeck, the chief conservator with the Smithsonian, whose master’s degree focused on Haitian art. “When you have that little left, there’s nothing you can do.”

For the murals still standing, she said experts had higher hopes and immediate plans. For the past several weeks, Haitian workers in what was once the sanctuary have been carefully constructing scaffolding. A web of wooden beams now holds up tin and vinyl to protect the paintings, supporting both the art and the workers trying to carefully chisel it away.

Simply hearing hammers and seeing scaffolding — what smiles they bring here in a city where reconstruction is practically non-existent. No less soothing is the classical music — the high wail of trumpets, the smooth pull of violins — that frequently comes from behind the church, where Mr. César teaches outside. He is one of the many in Haiti who learned his first bars of music at the church’s music school. “My whole identity is here,” he said, and on this campus at least, reconstruction means more than architecture: a full artistic life is also being rebuilt.

The effort to save the murals is a visible extension of a little-known cross-border bond. The Episcopal Church of Haiti was founded by an African-American named James Theodore Holly, who led about 2,000 black Americans to Haiti in 1861 as part of a wider emigration movement. He and his sons played prominent roles as professionals and scholars after founding “what was actually Haiti’s first national church, and the first Episcopal church founded outside of the Anglophone world,” said Laurent Dubois, a historian at Duke University.

The eight muralists, while Haitian from their toes to the tips of their paintbrushes, also had American ties. Many trained at an academy founded by an American artist, DeWitt Peters, who came to Haiti in 1943.

Credit for the work, though, must also be shared by the Haitian bishops and priests who “gave them the liberty they needed,” said Mr. César. Some of the unconventional images would later become controversial for Christians who saw links to voodoo, but for many Haitians and art historians, they represented one of this country’s proudest cultural moments.

The earthquake ruined much of that. Only The Last Supper, Native Procession and The Baptism of Christ survived — and each work bears the wounds of the vicious tremor that killed 300,000 people. The paintings’ winding cracks, running through legs, through torsos, and through the neck of a dark-skinned woman in the baptism scene who seems to be screaming, are violent and painful.

Ms. Hornbeck said that conservators and the church are still discussing which damaged elements must be fixed.

But Mr. César, standing near the church’s former entrance, said he had little doubt about whether the paintings would be fully restored, or left how they appeared after the quake. He said that instead of rebuilding the church, religious leaders are planning to create a garden for the murals, in which they can reside in nature, earthquake scars and all. He said it was the only way to remember, the only way to move on.

One thought on “Haiti’s Scars, and Its Soul, Find Healing on Walls”