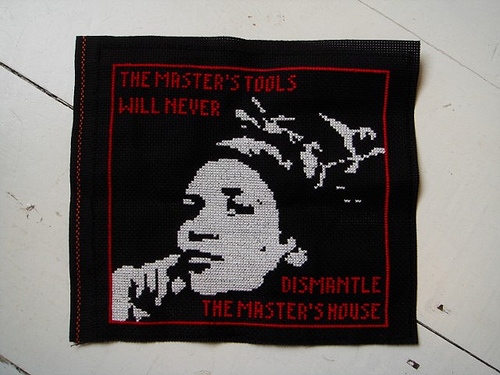 Jamilah King celebrates the birthday of Audre Lorde at cololines.com. The late Caribbean born writer and activist would have celebrated her 77th birthday yesterday.

We’re all about birthdays at Colorlines.com. And today we’re celebrating Audre Lorde, the revered Caribbean American writer, poet, theorist, and lesbian activist. Lorde lost her long battle with breast cancer in 1992, and would have turned 77 today. She’s perhaps most widely known for her collection of critical essays Sister Outsider, along with her biomythography Zami: A New Spelling of My Name. In the 1980’s, Lorde teamed up with fellow writer Barbara Smith and founded Kitchen Table: Women of Color Press, which became one the most important publishing houses for radical women of color writers in the 1980’s. In 1991, she became poet laureate of New York, but once described herself simply as a “black, lesbian, mother, warrior, poet.”

The legacy of her work can still be felt on syllabi, bookshelves, and hearts worldwide. Notably, there’s the Audre Lorde Project in New York City, a home to queer community activism and creative arts. The interview clip that’s above is the first part of a documentary from Third World Newsreel, in which Lorde describes her creative process. And in honor of Lorde’s celebration of love in all its complicated forms, here’s a short poem from her collection:

of our bloodiest battles

you lay down your arms

to conqueror me home.

For the original report and a video go to http://colorlines.com/archives/2011/02/to_and_from_audre_lorde_with_love.html