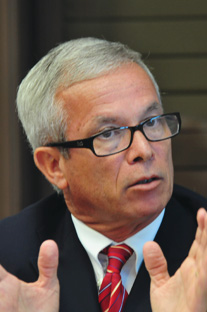 The student body and several university unions expressed dismay at the choice as their hopes were set on José Lasalde—who received 9 votes against and 8 in favor. Faculty trustees Waldemiro Vélez and Marta Bustillo, as well as student representative René Vargas said that Muñoz’s team represents “the return of the tough stance” [la mano dura; literally, hard hand] at the UPR.

Muñoz served as Secretary of Agriculture under the administration of Pedro Rosselló, another fervently pro-statehood governor. The present dean of the UPR-Mayagüez served as interim president of the UPR from October 1, 2009, until the first half of 2010, when José Ramón de la Torre was chosen. In a press release, Muñoz thanked the Board’s trust in him and said that this will be “a great challenge and an opportunity to continue contributing to the development of the University,” adding that he is a fervent advocate of the university system. He noted that “The present times are difficult, but with will and strength, all of us academics can join, resolve the differences that divide us, and unite to achieve the educational excellence Puerto Rico deserves, that our youth merits.” Muñoz also insisted that the students are the raison d’être of the university and he exhorted them to defend the institution by “studying and working.”

3 thoughts on “Interim President Chosen for University of Puerto Rico”