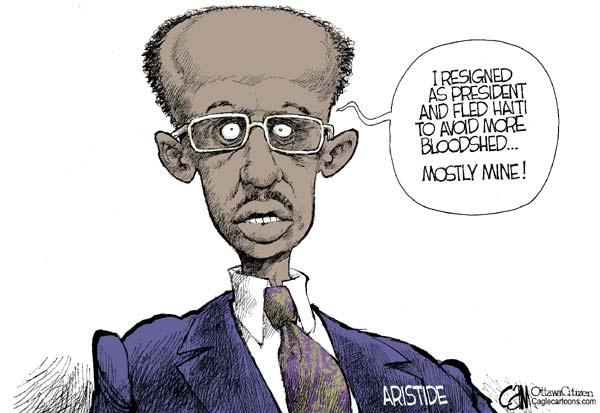 Aristide does not plan to return to Haiti politics, his lawyer claims, as reported by Hank Tester and Todd Wright for nbcmiami.com

It’s been seven years since Jean Bertrand Aristide was welcomed back in to the country he once led.

Now the former Haitian president feels it’s time to go back home. but don’t call it a comeback.

Aristide said Monday that he has received his passport, which will allow him to return to Haiti and the timing couldn’t be any better or worse.

Haiti is in the midst of contentious elections campaigning, which will culminate on March 4 during the presidential election.

Nothing like the shadow of an extremely popular and polarizing ex-president to add a little heat to an already boiling situation.

The veteran international lawyer says the United States is opposed to the return believing that the former Catholic priest and education would disrupt the already shaky electoral process.

“The reality is he is extremely popular. If he comes back to Haiti, it would result in hundreds of thousands to welcome him, probably the largest gathering of people in Haitian History,” Kurzban said.

Kurzban has been Aristide’s lawyer for years. The deposed and exiled Haitian President was booted out of the country in February 2004. Kurzban has tried to get him back to Port au Prince ever since.

Reports are that crowds of Haitians have descended on the Port au Prince Airport after hearing false reports that Aristide was on his way. Rumors flashed through the streets that the exiled president was in Jamaica or Panama.

Workers have been seen fixing up Aristide’s home that was trashed after his flight out of the country, several reports have said.

The Aristide return movement got wings kast month when Jean-Claude “Baby Doc” Dulvalier suddenly appeared in Haiti after years in exile. The former “President for Life,” and accused swindler and torturer is, for now, walking free in the streets of Port au Prince.

Aristide, who critics accused of having ties to drug smugglers, said he too should be able to return to the earthquake-ravaged country.

Kurzban sums up Aristide’s political power saying, “he is among the three or four most popular people in Haitian History. The U.S. knows that he would get 55-70% of vote if he ran.”

But Kurzban says Aristide is not interested in getting back into politics.

“If he says he is going to be involved in education I believe him. That’s why he wants to go back,” he said. ” I do not believe he has any political ambitions to be president again or anything like that.”

Find this article at http://www.nbcmiami.com/news/local-beat/Exiled-Haitian-President-has-a-passport-will-travel-116191264.html

Cartoon of Aristide from http://tweetbeat.com/events/6919-u-s-revokes-visas-of-haitian-officials/replay

2 thoughts on “Exiled Haitian President Has Passport, Will Travel”