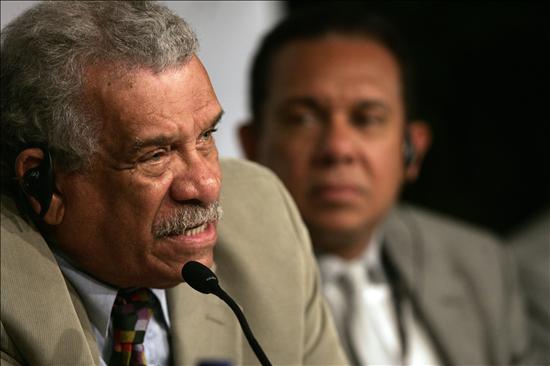 One of Britain’s richest, and certainly strangest, books prizes has announced its shortlist, pitting Nobel laureate Derek Walcott‘s poems against a study of South African censorship, a work of speculative anthropology and another blending science and aesthetics as well as two novels. The Warwick prize for writing is an international award carrying a £50,000 purse which looks to honour “a substantial piece of writing in the English language, in any genre or form, on a theme which will change with every award”. This year’s theme is “colour”.

Walcott’s collection White Egrets, which won him the TS Eliot prize for poetry in January, is probably the most prominent contender. It stands alongside five other titles, reflecting in this year’s theme in varying ways. There are two novels on the shortlist: Nadeem Aslam’s The Wasted Vigil, described as a “lyrically written novel about contemporary Afghanistan”, and Aminatta Forna’s The Memory of Love, about the aftermath of Sierra Leone’s civil war. Meanwhile Peter D McDonald’s The Literature Police explores censorship and cultural resistance in apartheid South Africa, while Peter Forbes’s Dazzled and Deceived explores mimicry and camouflage in science, art and nature.

The final shortlisted title is Michael Taussig’s What Color is the Sacred?, an anthropological analysis of the role of colour in the “bodily unconscious” and its colonial history.

Chair of the judges Michael Rosen said: “We have chosen six excellent books across poetry, anthropology, science and fiction. Each in their own way, the books explore colour either on its own terms or as a prism through which the writing emerges. I’m looking forward to some tough arguing over choosing the winner.”

The biennial prize was awarded for the first time in 2009, with the appropriate inaugural theme of “complexity”, and went to Naomi Klein’s The Shock Doctrine.

For the original report go to http://www.guardian.co.uk/books/2011/feb/11/prize-books-about-colour-shortlist