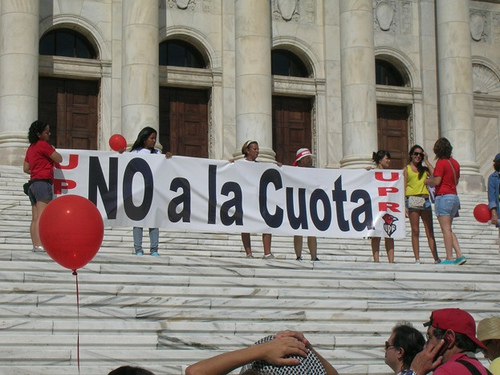 Lauren Sieben, writing for the Chronicle of Higher Education, offers this summary of the situation at the University of Puerto Rico.

Student activists at the University of Puerto Rico at Río Piedras, the system’s flagship campus in San Juan, have resumed their protests over a tuition surcharge in recent months, following a two-month student strike last spring that shut down the university.

On Monday students marched through the campus in protest of an $800 special fee that they said threatened the university’s accessibility to low-income students. Although the demonstrations proceeded peacefully, several protests in the past few months have culminated in violent confrontations between students and police officers, according to local reports.

Students participating in the march, which was organized by the Student Representation Committee, demanded that the university repeal the fee and eliminate the police presence on the campus.

In June 2010, the university reached an agreement with student-government leaders after a two-month strike over a proposed change in tuition exemptions. Part of the settlement required that the university not demand the $800 fee until January 2011, instead of last fall. Students protested the fee again in December. The extra charge is intended to compensate for the university’s budget deficit of roughly $70-million, according to the Puerto Rico Daily Sun.

José Ramón de la Torre, president of the University of Puerto Rico, released a statement Monday acknowledging that enrollment for the spring semester has dropped by 5,184 students systemwide, a drop of about 8 percent in the 64,000-student system. He added that the university has received 3,044 applications for December graduation.

“Statistics show that about 6 to 11 percent is the usual reduction for the second academic semester at UPR, although this tends to increase when there are student conflicts,” he said in the report.

After the two-day protest in December, during which protesters purportedly became violent, the police took over the Río Piedras campus for the first time since 1981. Gabriel E. Laborde, a recent graduate and a former student-government president who helped organize the protests last spring, said that several demonstrators attacked other students with smoke bombs when they refused to leave their classrooms during that 48-hour strike.

“The strikes turned violent, unlike the ones we had during the spring,” he said. “It’s bad for the image of the students of Puerto Rico. It divided the students.”

The newspaper Claridad reported that during a demonstration on January 27, police officers pushed students into the pavement; applied pressure-point techniques to the backs of their necks, under their eyes, and on their temples and throats; and sexually assaulted some female students. Other reports stated that the police used rubber bullets and tear gas while arresting demonstrators.

María Mercedes Carruthers, a senior and a delegate to the student-representation committee, says she was hit and badly bruised by a police officer, who pushed her onto the ground during a recent strike. “Right now we have all the special- task-force units at our university, supposedly looking out for the infrastructure of the university,” she said. “They’ve relocated all these police officers from the most dangerous areas on the island.”

Varying estimates suggest that more than 100 students have been arrested in the recent protests. Gamelyn Oduardo, a third-year law student, was arrested January 13 during a rally on campus. He was charged with aggression to a police officer, an accusation that he said was “totally false,” and spent 12 hours in jail before being released after a preliminary court hearing. The police have 60 days to appeal the judge’s decision, Mr. Oduardo says.

Ana R. Guadalupe Quiñones, chancellor of Río Piedras, issued a moratorium on all student demonstrations until the campus stabilizes, according to people on campus and Primera Hora. The chancellor did not respond to interview requests.

Students still demonstrated on Monday, however, and the event went peacefully. Ms. Carruthers said that more than 800 students participated in the march on the Río Piedras campus.

“The students basically see this as a victory,” she said. “No one was arrested, there were no acts of vandalism. We were able to demonstrate solidarity.”

Manuel Gómez, director of the campus’s Resource Center for Science and Engineering and a principal investigator with the Institute of Functionalized Nanomaterials, said the $800 fee is a “nonissue,” and he doesn’t understand why students are still protesting.

Mr. Gómez said he had lost four tenured professors because of interruptions from student protests over the past year. The losses have caused “permanent damage” that he said would set his research back by at least 10 years.

University officials “called the police so we could enter and do our work,” he said. “Nobody wants the police here, but all the students have to do is stop interrupting and disrupting, and the police will walk out the campus.”

Mr. Gómez said he has considered retiring because he “can’t see any future if this anarchy continues.” He hopes the chancellor’s moratorium on student demonstrations will have some effect on the protesters at Río Piedras.

“She has a clear vision of how she has to balance the students’ right to protest and the right of those students who want to work,” he said. “You have to balance the two, otherwise you won’t have a university.”

For the original report go to http://chronicle.com/article/Students-Resume-Protests/126299/?sid=at&utm_source=at&utm_medium=en