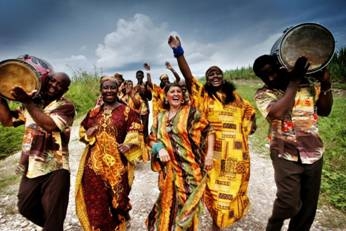 Following a sold-out run at Theatre Royal Stratford East, the Creole Choir of Cuba has been on tour all over the United Kingdom in January and February. Itzcaribbean.com writes about “the passionate melodies, wild harmonies and richly textured arrangements of [these] ten inspiring vocalists.” Here are excerpts with a link to the full review and schedule of performances below:

This is something new from Cuba, the most original vocal sound to come out of the country in a long while. Desandann, the Choir’s Cuban name, literally means ‘descendants’ and with the songs on their album Tande-La (which translates to ‘listen’) they tell the stories of their Haitian ancestors who were brought to Cuba to work in near slave conditions in the sugar and coffee plantations.

[. . .] As anybody who has witnessed the vibrant Choir can attest, this is an experience not to be missed. Their mesmerising sound, jubilant dancing and deep spirit first made them a hit in this country at the 2009 Edinburgh Festival. It was there that the producer of BBC 2’s ‘Later … with Jools Holland’ saw the Choir, a cornucopia of remarkable voices, and was so impressed he asked them to appear on the show. This happened in May 2010 when they performed the uplifting and emotional ‘Chen Nan Ren’ – a freedom song denouncing neo-colonialism and colonialism while conveying the celebratory and glorious feeling of resistance which harks back to the freedom songs of the 1960s circa Martin Luther King and the struggle for racial equality in the USA.

[. . .] In addition to Spanish and French, the Choir mainly sing in Creole, Cuba’s second language, spoken by almost a million people, a pragmatic fusion of African, French and other languages. It’s the language of a people twice exiled: first to Haiti from Africa through the iniquitous slave trade; then from Haiti to Cuba tricked into second slavery by their French masters after the Haitian Revolution of 1790. Other Haitians arrived in the 20th century fleeing political upheaval, poverty and oppression during the barbaric regime of Papa Doc Duvalier which held power from the 1950s to 70s, marked by reigns of terror and the brutality of his private militia, the Tonton Macoutes.

With irresistible melodies driven by richly textured harmonies, shifting Caribbean rhythms with a very original root bass sound, this is impassioned singing by a unique group celebrating roots, resistance and the irresistible rhythms of life. In the words of the glorious ‘Edem Chanté’ – Help Us Sing!

For a list of all the performances between February 8 and 20, 2011, go to http://www.itzcaribbean.com/creole_choir_cuba.php

One thought on “The Creole Choir of Cuba on UK Tour”