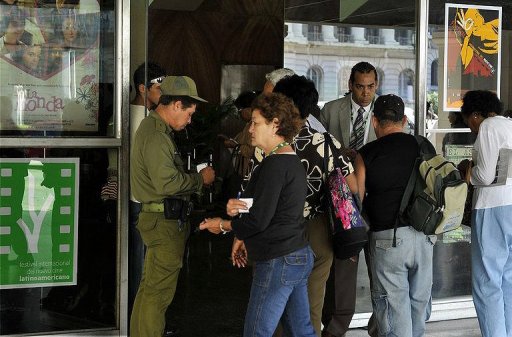 The International Low Budget Film Festival that Cuba has hosted for the past eight years will have a very low budget this year, organizers said Tuesday, as the AFP reports.

“Considering the economic difficulties that our country is experiencing, we have opted not to ask for the funding traditionally provided” by the Cuban government, said the festival’s director, Sergio Benvenuto, in a statement.

He said Cuban and foreign artists and filmmakers taking part in the April 5-10 festival in the seaside town of Gibara, Holguin province will have to pay their own way this year.

And no prizes will be given at this year’s event — the ninth since it was founded in 2002 — although this year’s entries will be considered for the 2012 competition, he said.

Nevertheless, Benvenuto said “numerous audiovisual works” from a variety of countries will be shown in Gibara during the week and it will be “a highly professional event with very elaborate shows and proposals.”

For the original report go to http://www.google.com/hostednews/afp/article/ALeqM5iu0wCDM_fmKgm3NhNQ6LStE6BGRA?docId=CNG.5245208a3cdbb72a5d8098fe7ef8e19a.3a1