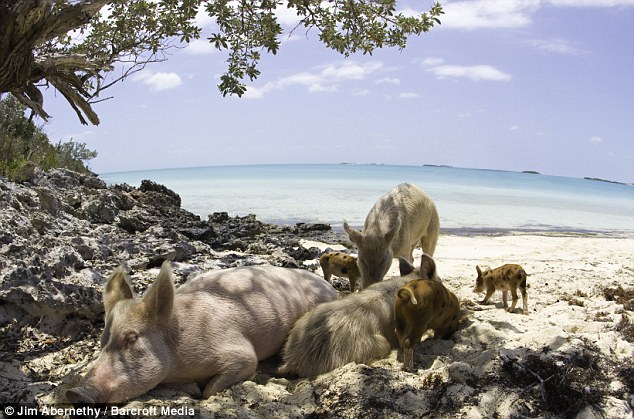 For your amusement, here is a story from London’s Daily Mail about a family of beach-bumming Caribbean pigs. If you can’t resist, there are many more photos through the link below.

These amazing pigs swim every day in the crystal clear waters of the Bahamas – on their own tiny island where they live in luxury. They show off their piggy-paddle to visitors who flock to their beach to see the extraordinary site of wild pigs making a splash in the beautiful azure sea.

Their exploits have been captured on camera by photographer and ocean guide, Jim Abernethy, 52, from Florida, who first stumbled across the feral creatures a couple of years ago. As this collection of photographs shows, the pigs are remarkably well adapted to their beach bum lifestyle of frolicking the water and lazing on the sand. ‘Whenever I show my photos of these pigs people are just blown away,’ explained Mr Abernethy. ‘They uniquely live in complete harmony on their island paradise. They are surprisingly strong swimmers. Even the younger piglets are totally at home in the water. They’re even happy to swim alongside people.’

Pig Island, or Big Major Cay as it is officially known, is blessed with a natural water spring and is sheltered by a string of neighbouring islands that protects it from waves caused by tropical storms.

The pigs are thought to have been introduced to the island by passing sailors who may have thought they would make a good food source. However, the sailors never returned and now all the lucky porkers have to worry about is where their next meal is coming from.

The clever pigs have worked out that the crews of passing yachts regularly dump excess food into the sea. The hungry pigs eagerly plunge into the waves when they see a yacht and will swim a few hundred feet up to the vessel in the hope of a free meal.

The pigs are so successful in their enterprise that they are now living the dream by raising their family of eight on a tropical island in the Caribbean with nothing to do but eat, sleep and swim.

In 2009 underwater photographer Eric Cheng stumbled across the unusual residents along with captain Mr Abernethy and took these images during a diving expedition. ‘We were in the southern Bahamas to photograph oceanic white-tip sharks,’ said the then-33-year-old.  ‘Our captain, Jim Abernethy, heard there were pigs on Big Major so we decided to go and check it out. Upon approaching the white sandy beach, it is easy to spot the pigs – both pink and dark brown – lying in the sand.’

Mr Cheng added: ‘Because locals bring food, the pigs will run into the water and actually swim out to the oncoming boats, as if to greet them individually. It is strange enough to see pigs laying around on tropical beaches of white sand, but to see them then charge into the water to greet oncoming boats is just bizarre.’

Spending several hours photographing and playing with the pigs, Mr Cheng and his team even managed to join them for a swim.

‘Nadine Umbscheiden, one of the photographers was so at ease with them that she managed to swim with them,’ said Mr Cheng. ‘We dubbed her the “pig whisperer” because she was so good at getting the pigs to swim to our cameras!’

Mr Cheng is the editor and publisher of Wetpixel.com, and is technical advisor and photographer for Sea Shepherd Conservation Society.

3 thoughts on “Beach Babe: The happy pigs that love to swim in the Caribbean”