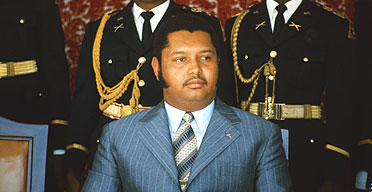 The Miami Herald reports that Jean-Claude “Baby Doc” Duvalier disputed reports that he had presidential ambitions. In a hastily prepared statement, the former dictator, says “I formally deny all political statements, vague or otherwise that are attributed to me.” The statement is the only public declaration the Duvalier has made since he was taken into custody for questioning on Tuesday.

The statements about his renewed aspirations to the presidency were apparently made by attorney Reynold Georges and spokesman Henry Robert Sterlin, who implied that Duvalier might choose to involve himself in politics. Carvais Jean, the investigative judge that visited Duvalier at the hotel Tuesday afternoon to confirm he was living there, also denied Georges’ assertion that he came to ask him to leave the country. Duvalier was to leave Haiti on Wednesday, but authorities have taken possession of the expired diplomatic passport with which he traveled to Haiti.