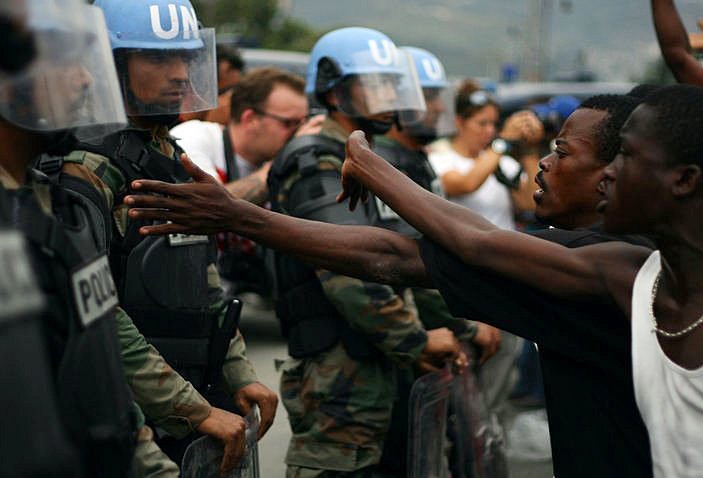 Michael Deibert, in an editorial piece for CNN,  says “Baby Doc’s” return is reminder of Haiti’s culture of impunity.

The return to Haiti this week of Jean-Claude Duvalier, the scion of a family dictatorship that misruled that Caribbean nation for 29 years, is a sharp reminder of how impunity remains a significant stumbling block as Haitians try to construct a more just and equitable society.

Returning to the same airport from which he fled in 1986, Duvalier (popularly known as “Baby Doc” to distinguish him from his more unhinged dictator father, François “Papa Doc” Duvalier), looked stunned and confused, as if the Port-au-Prince to which he returned — still leveled from a 2010 earthquake that killed more than 200,000 people — had changed beyond recognition.

Unfortunately for Haiti’s people, however, some things about the nation — which produces sinuous music, acidly brilliant novelists and stunning art, along with grinding poverty and political unrest — have yet to change.

Though Duvalier presided over his sputtering police state without the gleeful ruthlessness of his father, his tenure in Haiti’s presidential palace was nevertheless perhaps best summed up by a prison on the outskirts of the Haitian capital called Fort Dimanche, where enemies of the state were sent to die by execution, torture or to simply waste away amidst conditions that were an affront to humanity.

The figure of the rotund Duvalier — who was questioned today by a Haitian judge about a few of his government’s many transgressions — and his spendthrift wife presiding over such a desperately poor country might have been farcical were the results not so grim.

Haitians’ great hopes after Duvalier’s flight were sobered considerably amidst ever-greater bloodletting, as pressure groups such as the Duvalier’s former paramilitary henchmen, the army, the country’s rapacious elite and others vied for the spoils of power.

The election of Jean-Bertrand Aristide at the head of a broad-based coalition in 1990 was followed by a coup only seven months after his inauguration. Three long years of paramilitary terror followed before Aristide was returned by a U.S.-led military mission to Haiti in 1994. The leaders of the regime that oversaw the terror, again, fled to their comfortable repasts abroad.

But happy endings are hard to come by in Haiti. As Duvalier whiled away his time, using his ill-gotten fortune in Europe, the newly returned Aristide set about creating a thuggish style of governance that the younger Duvalier’s father would have found very familiar.

Corrupted elections in 1997 and 2000 favored Aristide’s loyalists, and important statutes of Haiti’s 1987 constitution — such as those forbidding the cult of personality and protecting the independence of the judiciary — were trampled.

By the time Aristide returned to Haiti’s national palace in 2001, a network of armed partisans reminded many Haitians of the ruthless methods of rulers past. Then, 18 years after Duvalier’s flight, Aristide followed him into exile in February 2004, amid street protests and a rebellion spearhead by formerly loyal gang members.

The grotesque excesses of Duvalier are perhaps the most well known, but to date, none of these men have seen the inside of a prison cell for the actions of their respective regimes. Victims of the Duvaliers’ network of enforcers — the Tontons Macoutes — have waited in vain for justice and even seen former Duvalierist officials recycled in succeeding, supposedly “democratic,” governments.

Nor has anyone yet been held accountable for several large-scale killings by government security forces — or the slaying of at least 27 people in the town of St. Marc in February 2004 that occurred as the Aristide government drew to its inevitable denouement .

Frustratingly for the people of Haiti, far from being supported in their calls for justice, the abuses they have experienced have more often than not become a political football among international actors.

During the height of the excesses of Duvalier fils, Ron Brown, then acting as deputy chairman of the Democratic National Committee and later serving as Bill Clinton’s secretary of Commerce, lobbied the U.S. Congress on behalf of the dictator, pocketing more than half a million dollars for his efforts.

In the present day, a U.S.-based organization called the Institute for Justice and Democracy in Haiti, linked at the hip with Aristide’s U.S. attorney, Ira Kurzban, has worked to discredit the calls for justice of the survivors of the massacre in St. Marc. Kurzban’s law firm made millions representing the Aristide government.

Like Duvalier before him, Aristide continues to enjoy a gilded exile, this time in South Africa, where his comfortable lifestyle is bankrolled by South African taxpayers.

And now Duvalier, one of Haiti’s waking nightmares, is back in his native land. Will he face justice? What will that justice look like in a place where recently political actors saw fit to rig an election amidst the ruins of a country that has yet to even begin to recover from last year’s apocalyptic tremor?

The aforementioned great writers of Haiti no doubt find it all bitterly symbolic.

Out of the ruins of the Duvalier torture prison, Fort Dimanche, now abandoned, grew a slum. Its residents called it Village Demokrasi. Democracy Village.

It is here where, as Duvalier returns from 25 years of exile and Haiti marks as many years of the international community’s questionable ministrations, that residents try to stave off hunger pangs with cakes made out of clay and seasoned with cubes of chicken or beef bouillon.

There is symbolism in that, too.

For the original article go to http://edition.cnn.com/2011/OPINION/01/19/deibert.haiti.duvalier/?hpt=Sbin

2 thoughts on “A nightmare returns to Haiti”