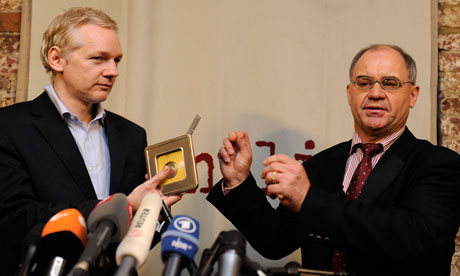 Rudolf Elmer, former chief operating officer at the Cayman Islands subsidiary of a private bank, handed over two CDs with client data to WikiLeaks founder Julian Assange on Monday; he has been arrested in Zurich hours after escaping a prison sentence for breaching banking laws.

Hours earlier Mr Elmer had avoided a prison sentence. A court in Zurich fined him for breaking the country’s client-secrecy laws and making a death threat against a bank employee. Judge Sebastian Aeppli said the criminal court found him guilty of making a ”threat, several counts of attempted duress and multiple counts of breaking banking secrecy”. He imposed a fine of 7200 Swiss francs ($7500), which was suspended for two years. The prosecution had wanted Mr Elmer jailed for eight months.

When Mr Elmer returned home he was met by eight policemen who took him into custody, according to news reports. His wife told media that their house had been searched.

Judge Aeppli claimed that Mr Elmer had been a part of the banking world for years and had he had benefited from this, adding that his motives in handing over the bank client data to WikiLeaks stemmed from his dismissal from Julius Baer Bank five years earlier.

Mr Elmer has said he wanted the world to know the truth about money concealed in offshore accounts and tax evasion as well as the systems in place to keep it secret. In court he said the bank’s activities were immoral, that they did not conform with ethics, and that they “took a criminal turn.” He denied making the alleged threats but acknowledged that he had sent data to Swiss tax authorities.

His lawyer Ganden Tethong Blattner told the court on Wednesday that Mr Elmer was engaged in a “David against Goliath” battle, arguing that Swiss banking secrecy law was not applicable in the Cayman Islands, the Caribbean banking haven where Mr Elmer worked.

The clients listed on the two latest disks include about 40 politicians, multinational companies and financial institutions from the US, Europe and Asia. However, Tony Travers, chairman of Cayman Finance, which oversees financial services in the world’s fifth ranked offshore banking centre, has downplayed the significance of the information handed over to WikiLeaks.