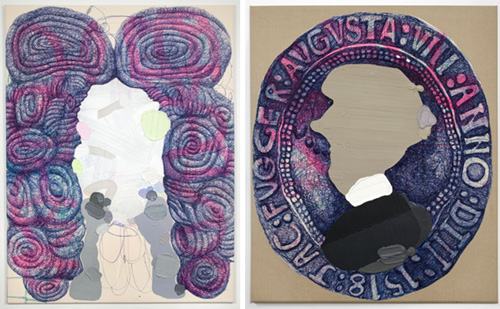 Until January 22, 2011, the Andrea Rosen Gallery is featuring Puerto Rican-based artist José Lerma’s exhibition I am sorry I am Perry. The gallery is located at 525 West 24th Street in New York City.  See review (courtesy of DaWire) with a link below:

For his third solo exhibition at Andrea Rosen Gallery in NYC, José Lerma takes on three ideas that have preoccupied him in the past couple of years: the Bankers, the Reflective Curtain and the Keyboards. Under the title I am sorry I am Perry, the show gathers mixed media painting and installation. The title, although possibly strange for many, is the punch line of a popular joke in Puerto Rico, where an English-speaking fox (zorro) and a Spanish-speaking dog (perro) bump into each other and in apologizing, reflect the complexities of bilingualism, translation and a jagged political situation.

Under this seemingly apologetic but intensely political title, Lerma presents a series of mixed media portraits painted as to resemble office materials such as a BIC ballpoint pen and a fluorescent pink highlighter. These portraits of bankers began with a chance encounter with a bust of Samuel Bernard during Lerma’s first visit to the Met while still a law student at the University of Wisconsin. He then continued to make portraits of famed financiers such as Jacob Fugger and John Law, resulting in the faceless portraits that have become characteristic of his work. Some of these are propped up on keyboards, which echoes a sculpture Lerma did back in 2003 titled “The Saddest Chord in the World,” where he leaned a keyboard on the wall and with masking tape had the notes D, F, and A pressed so as to create a D minor chord. Here, the weight of the painting does the trick.

Among these paintings is a larger version of one of his previous reflective curtains. This one is made of a 3M reflective material used for night safety. Commenting on this version for the exhibition’s press release, Lerma says that he “was interested in reversing its function (light suppression) to, if not light emission, a hyper-reflection. This idea of being aligned with light picks up on a parallel narrative to a strand of positivist ideas in art and painting in particular.”

José Lerma, born in Spain and raised in Puerto Rico, studied political science at Tulane and law at the University of Wisconsin, Madison, before switching his major to art and earning his MFA. He was granted a year-long residency in Puerto Rico, attended Skowhegan School of Painting and Sculpture, and the Core Program (affiliated with the Museum of Fine Arts in Houston, TX). Since his previous exhibition here in 2006 Lerma has exhibited at the Museum of Fine Arts, Houston, the Milwaukee Art Museum, El Museo del Barrio, New York, the Museum of Contemporary Art, Detroit, and the Institute of Puerto Rican Culture to name a few; as well as showing internationally with recent solo gallery exhibitions in Seoul, Berlin and Madrid. José Lerma lives and works in New York and Chicago, where he is on faculty at the School of the Art Institute of Chicago.

For more information on the Andrea Rosen Gallery, see http://www.andrearosengallery.com/