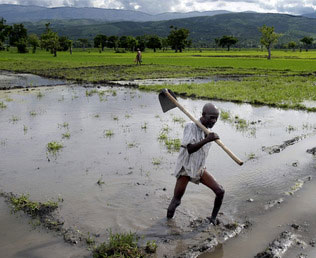 Haitian rice farmers may lose part of their crop due to fear of working in possibly cholera-contaminated paddy fields, a United Nations organization said.

The United Nations Food and Agriculture Organization said Wednesday it is working with the Haitian ministries of agriculture and health to spread hygiene information to farmers, many of whom in the northwest of the country are reluctant to harvest their rice paddies in fear of contamination by cholera-causing bacteria.

The FAO says it is trying to inform farmers concerning the right precautionary measures to take while working in the fields.

There have also been reports of people avoiding food raised or produced in cholera-affected areas, a situation potentially affecting agricultural trade, the United Nations said.

The October cholera outbreak was exacerbated by November floods brought on by Hurricane Tomas, which damaged 193,000 acres of crops the United Nations said.