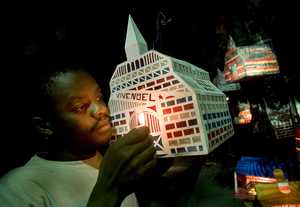 In this solemn post-quake year, fanal makers continue a Christmas tradition of crafting lantern-like houses and churches. The Miami Herald reports on the tentative but hopeful array of this holiday artistic production. Here are excerpts with a link to the full article below:

For 10 years, Edme Herold has used the holidays and a skilled hand to fill his pockets with cash — a few gourdes here, a few gourdes there. His colorful handiwork: fanals, which are miniature, lantern-like homes that are part of Haiti’s Christmas tradition. A candle placed inside illuminates the fragile craft and creates a stained-glass effect. The size of either a shoe box or as small as a camera, fanals are often placed in windows to light the way.

[. . .] The fanals — a centuries-old Christmastime tradition some say originated in West Africa and others say was used to light worshipers’ way to church — come with a small irony this first Christmas since Haiti’s devastating earthquake last January. The little tissue-paper houses are still standing while many Haitians’ homes are in rubble. Herold crafts these items to brighten up a holiday home yet lives under a tarp this year.

“They are a sign that Christmas is coming,” Lori Manuel Steed, a Haitian artist and art promoter, said about the first sight of fanals on the streets. “Amid the violence and anger, there is a softness.” Many fanals emulate Haiti’s yesteryear — chiefly, the gingerbread homes, an architectural style prevalent in the late 19th and early 20th centuries, which largely survived the 7.0-magnitude quake.

Some feel little joy this holiday because of the disaster that claimed up to 300,000 lives, a subsequent cholera outbreak, and a volatile presidential election. But there are small signs the season won’t go ignored. Restaurant workers don Santa hats. A nurse in a neo-natal ward pastes stickers on the beds of newborns. They read: “Joyeux Noel.”

Making fanals — long the domain of children — is a distinctly Haitian tradition, like eating pumpkin soup on New Year’s Eve. Finely crafted fanals have received recognition in exhibits in Port-au-Prince museums and even the Miami-Dade Public Library, which held a fanals exposition in 2004, the year of Haiti’s bicentennial.

Come October or November, Edme Herold heads to the store. He purchases his supplies: tissue paper and cardboard. Sliced pieces of colorful tissue paper are used to create the stained glass-like windows. “Vive Noel” is cut on the front facade of the churches. The more elaborate ones come with stairwells and balconies. Herold’s bigger, more intricate fanals can take up to two days to make, he said. They sell for about 1,000 gourdes, or $25, though there’s room for negotiation. The smaller churches and houses sell for about $6. Once they’re built, Herold displays the fanals on a wire from his coveted spot on the side of Route de Bourdon, a busy thoroughfare that connects downtown Port-au-Prince to the relatively upscale suburb of Pétionville. It’s where many of the other artisans gather, along with merchants of traditional paintings and iron work.

Herold said they sell here because of the “tourists” that pass by. The Montana, a sprawling hotel known for its mahogany furniture and patio overlooking Port-au-Prince, used to be on a nearby side road but it pancaked in the earthquake. Today, most of the “tourists” are relief workers and members of the Haitian diaspora who’ve come to help or visit family. [. . .] So far he has had only 10 buyers.

“Life is expensive, and the country’s in a crisis,” he said as he used a ruler to draw the contour of a new design. [. . .] “I have hope that I can sell. I need this hope that I will sell.”