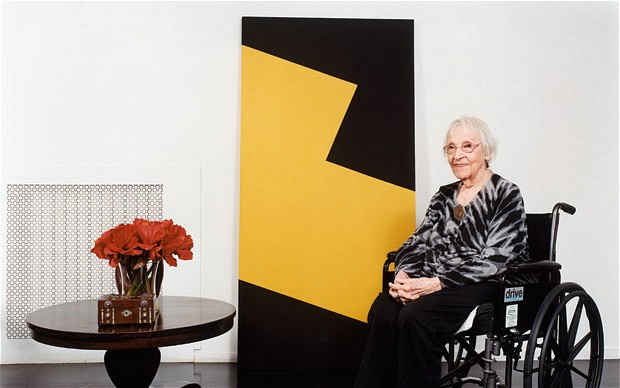 After a lifetime of anonymity, the 95-year-old Carmen Herrera is suddenly one of the world’s most collectible living artists.  Helena de Bertodano of London’s Telegraph has publsihed this interview with the surprisingly famous Cuban artist.

‘Since I am famous, my life is hell,’ grumbles Carmen Herrera, the 95-year-old Cuban artist who sold her first painting six years ago and has been hailed as the discovery of the decade.

‘I used to have a quiet life doing what I liked to do – which is painting.’

Herrera worked in obscurity for nearly seven decades; now her canvases fetch up to $50,000 (£30,000). ‘I was amazed when my first painting sold,’ she says, shaking her head. ‘I still am amazed.’

Her work is now on permanent display at the Museum of Modern Art in New York, the Hirshhorn in Washington and Tate Modern in London and she has frequent exhibitions – including one currently at the Lisson Gallery in London.

Speaking in slightly stilted English, Herrera has a voice that teeters towards laughter, taking the edge off her blunt statements.

Wheelchair-bound and arthritic, she never leaves her studio loft apartment in New York. Her friend Tony Bechara, a Puerto Rican artist, lives a few doors down and organises the exhibitions of her paintings, intense geometric minimalist distillations that defy explanation.

Herrera sits at a long desk overlooking the bustling street below.

Strewn across the desk are industrial-sized rulers and piles of graph paper, covered in geometric calculations and lines. In one sketch two white lines zigzag identically across a black expanse. On the sides numbers are scrawled in pencil.

Next to it is an almost identical sketch. ‘The first one didn’t satisfy me,’ explains Herrera, pointing at it with long unwavering fingers.

‘It’s a very selfish way of doing things – I have to work on it for a while before I come to a decision. Sometimes it takes weeks and sometimes I get stuck.

‘Really, fame is ridiculous. I didn’t used to bother anyone and no one bothered me. Now I am paying because they are paying me.

‘The money is useful because at the end of life, to my amazement, you need a lot of help. Otherwise I would end up in a nursing home. And I dread that.’

Herrera has four helpers who rotate around the clock, enabling her to stay in the home she has occupied for decades.

‘You are very nasty, Tony,’ says Herrera. ‘When you are 95 you will forget your own name.’

They tease each other throughout the interview. Bechara is like a son to Herrera, who has no children of her own. Her husband, Jesse Loewenthal, a teacher, died 10 years ago, aged 98.

‘Jesse was a saint and I’m thinking back and I never even thanked him for all he did for me. He was the only one I ever spoke to about my paintings. He understood what I was doing and he was always supportive.

‘I made him move to neighbourhoods that were cheap and sometimes dangerous so I could have room to paint. We had a very good life, actually. We became closer and closer and by the end we were one person.

‘We could think without talking. He died right here in this room with me holding his hand. Lately I miss him a lot.’

Herrera may not have a head for dates but her mind seems perfectly sharp in all other respects. And she is still painting prolifically.

Behind her chair is one of her recent works – a 6ft black canvas with a large irregular yellow zigzag across the middle. ‘I like yellow and I like lines,’ she says, when I ask her what the painting represents. Once she has an idea she works obsessively.

‘She can be a real pain,’ says Bechara. ‘The paint is never black enough.’

‘For me black is all the colours, somehow,’ explains Herrera. ‘The other colours are like a decoration.’ She describes her work as an intellectual process.

‘It’s mostly here,’ she says, pointing to her head. ‘I don’t have a heart to paint. I have a brain to paint. I don’t paint babies or flowers or things like that. They don’t interest me.’

She scoffs at people who say her work looks easy. ‘Perhaps they should try it.’

It was Bechara – who first met Herrera and her late husband more than 30 years ago – who engineered the sale of her first work.

‘Carmen came to me around 2004 and said, “I have to destroy most of this work because it’s a nuisance. You can have some of it and if you can place it in a museum in Cuba after Fidel dies I would be grateful.”

I said, “Carmen, that’s a big responsibility; let’s try something else.”’

A few years earlier he had arranged a show for her at Museo del Barrio in New York, but although it was critically acclaimed Herrera sank back into obscurity.

This time he mentioned her work to Frederico Sève, the owner of a gallery in New York, who was organising a three-woman show. ‘One of the women had dropped out and I said, “I have the perfect woman for you: Carmen Herrera.”’

‘Who the hell is Carmen Herrera?’ Sève replied. But when he saw her work he was flabbergasted. The canvases predated by a decade other artists working in a similar style.

Recognising that he had before him a pioneer of Latin-American modernism, Sève added her to his show. Herrera chuckles. ‘I remember saying, “I feel terrible for this poor man. Nothing is going to sell.”

Then I had a call saying, “Somebody bought one of your paintings.” I said, “Oh, goody.” I was wondering, “Is it really happening or is it a dream?”’ Recently she came across some paintings she did decades ago.

‘I had rolled them up and thrown them in the closet. Some are in very bad shape but people are so crazy they buy them.’

Born in 1915, Herrera grew up in a busy household in Havana, one of seven siblings. Her father was the founding editor of the newspaper El Mundo, and her mother a reporter at the paper. As a child, she remembers lying on the floor painting.

‘I was left alone pretty much – my father was dead and my mother was too busy. But I do remember once my mother coming into my room and I was doing a painting and she said, “Da Vinci is using your hand to do that painting.”

Herrera was sent to finishing school in Paris, then returned to Cuba to study architecture. She met Loewenthal when he was visiting from America, married him and then moved to New York, abandoning her degree course.

Herrera says she did not decide to become a painter; it just happened. ‘It hit me in New York. I realised one day, “My God, I’m an artist, how horrible.”

Just as if you realise you’re in love with the wrong person. I do it because I have to do it. People keep saying, “How do you work all those years without any reward, no money, few exhibitions?” Because it was a vocation.

‘Why would anyone go to a hospital to take care of the lepers if they do not have the vocation of being nuns? It’s the same.’

After the war Herrera and her husband moved to Paris for a few years. ‘They were the happiest days of our lives,’ she says. Still groping her way as an artist, she found inspiration, and exhibited, at the Salon des Réalités Nouvelles, a venue for abstract artists to exhibit their work.

I ask her why she left Paris. ‘Money,’ she says. ‘We had to get the Yankee dollar.’

Settling into a studio in New York, she continued to paint while her husband pursued his career as a school teacher.

For the first few years she often returned to Cuba, where her brother had been imprisoned by Castro and her mother was still living. But she has not been back since her mother’s death more than 50 years ago.

And now she has no desire to. ‘It has changed too much. I know nobody in Cuba. My whole generation is gone. I am sick of banana republics, frankly.’

‘But you are talking to a journalist,’ says Bechara. ‘Her job is to write what you say. Do you really want her to write that you are fed up of banana republics?’

‘Shut up, Tony,’ says Herrera, taking a sip of her Scotch and water.

Although Herrera and her husband moved in artistic circles, no one caught on to the significance of her paintings. ‘There are so many people who thought what I was doing was crazy. Well, it was crazy but it’s paying now.’

Herrera herself was too diffident to promote her work. ‘I am very shy. I would die before I would do that.’ Now she finds it amusing that she was overlooked for so long.

‘The Museum of Modern Art kept going to Cuba to find artists when I was right here in New York. Why go to Cuba, for God’s sake? They should have discovered me long ago. I am happy the way things have turned out.

‘But if no one had found me I wouldn’t be unhappy either.’

It puzzles her why everyone mentions her age when discussing her work. ‘It’s ridiculous. My age has nothing to do with the painting. I have enough to cope with at my age without everyone talking about how old I am! I live in the moment.

‘My future is there waiting for me. When death happens it will happen – it can’t be that bad if everyone is doing it.’

Bechara is still fussing around her.

I ask Herrera why straight lines fascinate her. She shivers with delight. ‘Ahhhh, it’s almost a physical thing. There is nothing I love more than to make a straight line. How can I explain it? It’s the beginning of all structures, really.’

And where does the line end? Herrera chuckles. ‘It doesn’t.’

‘Carmen Herrera and Peter Joseph’ is at the Lisson Gallery, London NW1, until 29 January (lissongallery.com)