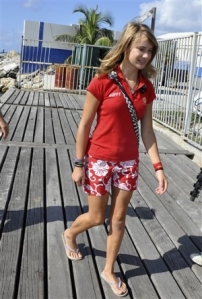 A 15-year-old Dutch sailor on Sunday completed the longest leg so far of her attempted circumnavigation of the globe, saying it felt “really weird” to be back on dry land after nearly three weeks out in the ocean, as the Associated Press reports. Fifteen-year-old Laura Dekker, aiming to become the youngest person to sail solo around the world, was in good spirits after completing the 2,200 nautical-mile (2,532 land-mile, 4,074-kilometer) trip from the Cape Verde Islands off West Africa. Dekker anchored her ketch just outside Simpson Bay Lagoon after what she called “a very nice trip” so far. “It’s really weird. It’s not moving and not bouncy,” she told The Associated Press as she tried to find her land legs while strolling in flip-flops along a sidewalk to the Dutch territory’s immigration office. “I don’t think I can live in a house at the moment.”

The Dutch teenager started her trip from Gibraltar on Aug. 21 and spent two months in the Canary Islands waiting for the hurricane season to pass. She left the Cape Verde Islands on Dec. 2. Dekker’s venture stirred an intense debate about whether young people should be allowed to sail the world’s oceans alone. A Dutch court originally blocked the voyage and only permitted her to set off after she took measures to manage the risks. She bought a bigger, sturdier boat than the one she originally planned to use, fitted it with advanced navigation and radar equipment, and took courses in first aid and coping with sleep deprivation.

In the end, the Dutch court ruled that her preparations were adequate and it was up to her parents, who are divorced, to decide whether to let her make the attempt. Dekker was born on a boat off New Zealand while her parents were sailing around the world. On a recent blog posting, Dekker said she “regularly wakes up after only one hour of sleep” and was looking forward to sleeping through the night while in St. Maarten.

On Sunday, she told the AP that she wasn’t sure how long she would stay in St. Maarten or precisely where her next leg would take her. “I will just stay here now for a bit and I will think about that,” Dekker said. “I’ve not really a plan. I just want to be in the Panama Canal in May, April, so until that time I will cross the islands, I think.”

Overall, the solitude of the trip wasn’t difficult, she said, although she did have fleeting bouts of homesickness. “There were two or three moments that I thought, ‘OK, why the hell am I doing this?’ But they were not for very long. If I feel really lonely I can always call my parents or something so then it’s over,” Dekker said.

Her circumnavigation attempt started two months after Abby Sunderland, a 16-year-old American, had to be rescued in a remote section of the Indian Ocean during an attempt to circle the globe. Earlier this year, Jessica Watson of Australia completed a 210-day voyage at age 16. But while Watson remained at sea nonstop, Dekker plans to stop at dozens of ports and may even return home to catch up on her studies before resuming her trip.

If Dekker completes the voyage, any record she claims would be unofficial and likely to be challenged. The Guinness World Records and the World Sailing Speed Record Council have decided they will no longer recognize records for “youngest” sailors to avoid encouraging dangerous attempts. Dekker said she’s in no rush at all and is having an “amazing” experience out on the ocean. “For me it’s more weird to be in a house for a week than to stay three weeks on a boat,” she said.

For the original report go to http://www.npr.org/templates/story/story.php?storyId=132184659