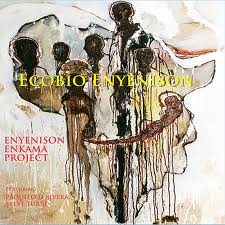 On Ecobio Enyenison, the participants celebrate the Nigerian and Cameroonian roots of some of Cuba’s population, which came from the Cross River are through the port of Calabar. The album features the vocals and drumming of Díaz, Martínez and Guerrero along with guest musicians Onel Mulet, Oriente López, Ruben Rodríguez and special guests Paquito D’Rivera and Steve Turre. The group combines traditional vocals and spoken word in Abakuá and Spanish, and ritual drumming with contemporary jazz elements in a direction similar to what Oma Sosa is doing. “The phrases of each composition describe sacred geographies (maps) of West African source communities, as well as histories (epic deeds) of the African founders,’ says Dr. Ivor Miller of the African Studies Center at Boston University. “By evoking these inherited chants, members of ‘Proyecto Enyenison Ekama’ praise their teachers, as well as all those Abakuá leaders of the past who maintained their faith in the teachings of those Carabalí migrants who established Abakuá. By chanting within the context of contemporary arrangements played by vanguard jazz musicians, they celebrate a cultural victory of continuity and evolution across time and space, as well as offer a vision of the expansion of their traditions into the future.”

The pieces are tributes to sacred lands, musical instruments of special significance and special people. “Eribó Eriboñé” is a tribute Homage to a mythic territory sacred to the Abakuá — ‘Orú’ — (known as Uruan in southeastern Nigeria), and to one of its sacred instruments, the Eribó symbolic drum. “Ekon Erimaó” features the ekon bell (‘nkong’ in Efik) which represents the community, being the instrument used to call people to order. “Itia Fondogá” is an homage to the Abakuá of Matanzas and to their music.

“Danza ñáñiga” by Ernesto Lecuona was originally titled “Danza lucumi,” according to maestro Paquito D’Rivera. This version also takes inspiration from Saldiguera, a founding singer with the Muñequitos of Matanzas, as well as from popular Cuban poetry from the early 20th century.

“Neri” is a tribute to the role of the river (Neri) in the development of Ékpè in communities along the Cross River.

“Mariba Konkai” means ‘the depths of the sea’. This composition is an homage to Nasako, the diviner.

“Isunékue” is dedicated to Isunékue Ernesto Sotolongo ‘El Zambo’, of the Havana potency (lodge) Itiá Mukandá.” ‘El Zambo’ was one of many colleagues who supported research for the book “The Voice of the Leopard” (2009).

For the original report go to http://worldmusiccentral.org/2010/12/19/roots-of-cuban-rumba/

2 thoughts on “Roots of Cuban Rumba”