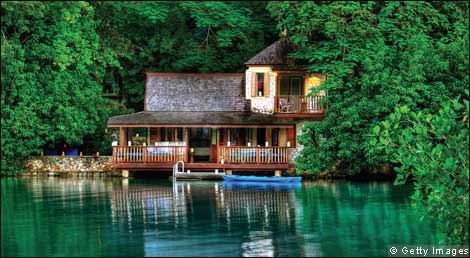 It’s Saturday, so weekend travel supplements abound. Sophy Roberts, writing for the Financial Times, looks at of GoldenEye, Ian Fleming’s former home in Oracabessa Bay, Jamaica, which now is a prime vacation spot on the island. Here is an excerpt, with a link to the full article below.

When I finally pull myself away from the terrace above the cliffs it is because I want to read beneath my bed’s mosquito net, keep the shutters open and listen to the waves breaking on the reef. I want to hear the crickets and frogs in the tropical vegetation that cradles my wooden cottage.

Then I pick up the sound of reggae. The beat reverberates deeply across the water, mixing with the click of backgammon tiles as they are pushed across suede. My companions are still to go to bed and I can hear the murmur of their conversation along with the regular roll of dice and the clink of ice in a tumbler. Someone offers more rum in the long vowels of the local patois. I think of Waugh and Capote, Graham Greene and Cecil Beaton and others who have lost their sense of time to this very spot over the decades – pristine, natural Jamaica, the patina of colonial 1950s glamour shot through with soulful Afro-Caribbean cool.

Such is the energy of GoldenEye, Ian Fleming’s former home in Oracabessa Bay, a one-time port for the banana trade on the north coast of Jamaica. It is hard to know if the spot inspired Fleming, or Fleming’s fiction put the glamour into the one place he felt he could write freely, but from 1949 until his death in 1964 he came for three months of every year.

All 14 James Bond novels were written at GoldenEye at a pace of 2,000 words a day and Fleming’s fantasies are almost tangible with every turn. GoldenEye might have been turned from a private home into a full-scale luxury resort, but you still feel as if an apparition in a white bikini will emerge from the ocean at any moment; that the cocktails will be perfect and the sex even better; that the sheets are always crisp and cool and the lagoon’s water is somehow clearer than a martini.

Yet in 2010, GoldenEye is more than cinematic cliché; it is about luxury, style and heritage but it also speaks to people who seek something true to Jamaica now.

“I hate air-conditioning,” says Chris Blackwell, founder of Island Records and the estate’s owner since 1976, who is offering guests who don’t use it $25 credit per room per day. “You don’t feel the air, hear the birds.” All but three of GoldenEye’s 150 staff are Jamaican, with more than 90 per cent from Oracabessa (one staff member, Ramsay Dacosta, used to work in Fleming’s garden). The cuisine is a spicy, impeccable reflection of the rich fruity flavours of Jamaica’s home kitchens. The classics (saltfish and ackee, curried goat) have been tweaked by Conroy Arnold, GoldenEye’s Jamaican chef who has cooked at New York’s Nobu and Le Bernardin. Local farmers provide the vegetables and meat; local fishermen provide the lobster, with only the bare minimum of specialist goods imported. And in terms of service, perfection isn’t the aim. Blackwell says: “It is about hiring local people with personality.” Last time I stayed at one of Blackwell’s hotels in Jamaica, it was on my honeymoon at Strawberry Hill and Jake’s, two other properties under Blackwell’s Island Outpost umbrella. Ten years on, I still remember the names of the barmen.

He tells me that he owns another two miles of coastline adjoining GoldenEye’s site. He envisions a town, a community re-invigorated, a corniche and a marina to one side of the marine sanctuary he has already established to resuscitate the reef. On January 12, a new airport, Ian Fleming International, opens for private aircraft, a four-minute drive from GoldenEye. As we jet-ski across the bay, it isn’t hard to imagine how the waterfront will look. I can picture Russians bringing in their super-yachts like modern-day Dr Nos, dropping anchor alongside the likes of Microsoft co-founder Paul Allen, who already frequents these waters in The Octopus. “Don’t you want to just do it all immediately?” I ask. Blackwell shakes his head. “The record industry is a good way to learn patience,” he says: “You have to wait forever for someone to tune their guitar.”

“I can sit here for hours,” says Chris Blackwell of the garden bench at Firefly, Noël Coward’s former home. With its hilltop perch, Firefly has views up and down the north coast of Jamaica, making it strategically vital to its one-time tenant, the pirate-turned-governor, Sir Henry Morgan. Coward acquired the property in 1948.

Today, Firefly is owned by the Jamaica National Heritage Trust and administered by Blackwell’s Island Outpost Group. It is an extraordinary place, the villa held in a Mary Celeste-state of suspended animation. On the grand piano sit photos of Lilian Braithwaite and Marlene Dietrich. First editions pepper the bookcases. In the bathroom, the towels are monogrammed “NC”, while inside the wardrobe Coward’s pressed short-sleeved shirts can still be seen. Firefly is about five miles from GoldenEye – and ideal for a picnic or cocktail. Along with the Noël Coward Foundation, Blackwell is looking at turning Firefly into a cultural centre to show films and host literary functions.

For more from the original report, including photos and maps, go to