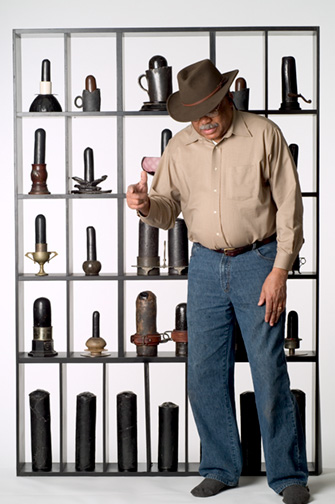 Guyanese born painter and sculptor Donald Locke passed away last week, on December 6, 2010 at his home in Atlanta, Georgia, after a long battle with cancer.

Donald Locke, born in 1930 in Stewartville, Guyana, began painting in 1947 under ER Burrowes, MBE, in the Working People’s Art Class in Georgetown, Guyana. Awarded a British Council Scholarship in 1954, he studied at Bath Academy of Art in Wiltshire, England. In 1959 he was awarded a Guyana Government Award to Edinburgh University, Scotland.

In 1979 he was awarded a Guggenheim Fellowship in Sculpture and he went to the United States. He was artist-in-Residence at Arizona State University for one year; he became a permanent resident in 1980In 1990 Locke moved to Atlanta Georgia and for five years was one of the resident studio artists at Atlanta Contemporary Arts Center. He was a member of the part-time faculty at Georgia State University and Atlanta College of Art. He retired from teaching in 1996.

During the following eleven years spent in the Southwest, Locke was known for his figurative sculptures in bronze and for his series of articles on the contemporary art of the Southwest in Artspace magazine, for which he was Arizona correspondent. In 1982 he was art critic for New Times, a weekly news and arts journal in Phoenix. His art criticism has also appeared in Arts Magazine.

Currently Locke’s work, primarily sculpture, is influenced as much by native cultures and vernacular myth as by classical European tradition. His most recent body of work seamlessly fuses these elements, integrating influences of his various ancestries (Africa, Asia, and Europe

Photo and more information from http://www.twmeyer.com/November2006.html

One thought on “Guyanese Artist Donald Locke Dies in Georgia”